In 2015 I went on a research cruise. It feels like last year but it isn't! It was the second and last cruise of the BRITICE-CHRONO project, of which Chris Clark of Sheffield university was the Principal Investigator (PI). And he was on board! Even in my team. He is a complete nutter and I'm glad I don't have to live with him but I like him. And then in spring last year he would come to Bangor University to give a talk about the project. He had been invited by Geography; they had beaten us to it! But the strikes happened and he didn't come. 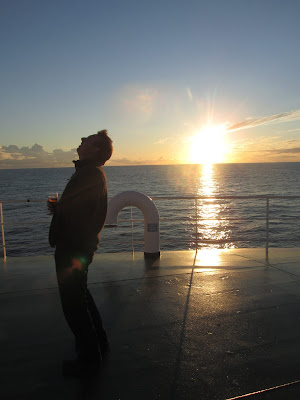 Chris enjoying some downtime on the cruise

Then on a Tuesday I was in the Geography building and saw Lynda, our liaison in Geography. She said he would be coming this week! Why didn't we know? But it was a good week for it; we had a guest speaker who was in town to see one of the biologists, and this biologist could look after this guest. I am the default person t receive guests and introduce them, and lead the Q&A session afterwards, but he could do that this time. I had my hands free for Chris! Lynda herself was going to be away on the day, which annoyed her a lot, but she had already found Katrien (another BRITICER) willing and available to look after Chris. Good!

On the day itself I had a lecture at 10 in the same building. Chris would talk at 12! So after my lecture I went to the nearest computer room to find Katrien, do some work, and wait for a sign of Chris. And then it came! We found him and took him for a coffee in the Pontio building.

He was well! And as usual he was full of tall stories. Never a dull moment with that man. And he was happy with how the project had been going but he was also aware of its complications; the project has a data component and a modelling component. The data people first create data and publish it; then the modellers use it for their models. But publishing data always takes longer than you hope! So the modellers had been waiting for the data to be available. And then ran out of time doing their modelling thing. Chris would have loved to have asked for a 3 year data project, then a few years in between, and only then the modelling part of the project. But he didn't think he would have been able to get that funded!

When we had downed the coffee it was time to go to the room he'd present in and set up. There were quite some people there! And rightly so. Even though it was a Geography talk, and we hand't felt it would be appropriate to advertise it in Ocean Sciences as it ran at the same time as our own seminar, I saw some Ocean Sciences face sin the audience. And Ed, the BRITICE PhD student, showed up too.

The talk was great! He managed to explain quite clearly why the work was needed. And how we had done it. And he had some modelling results that were so new none of us head seen them before! Very exciting. It turns out that the models really struggle to reproduce some of our observations. It's clear there are things we don't understand yet about melting ice sheets! And that our models therefore can't do. If we want to understand what the West Antarctic Ice Sheet will do we need to get these things right. Our models are all we have! So I hope our enormous dataset will inspire a big push in model improvement. And then we can model quite accurately how the shit will be hitting the fan!
Posted by Margot at 08:28