I figured the fireplace in the living room was looking a bit bald. It needed something! What about a mantle beam over the top? A clunky piece of wood makes most things look better. So I looked around a bit on internet and decided on a 10 x 10 cm beam, wide enough to span the entire thing. With faux supports. I'm far from being beyond kitsch!

It arrived on the same day as the garden shed. Good! That meant someone was home when it arrived. I plonked it in the storage and would get to it later.

The next Sunday I did get to it. I first spent what felt like an hour peeling it out of the packaging. Then I had a look at how to assemble it. There were no instructions! But after a look at the bits of wood and metal and how that could fit together it spoke for itself. I set to work!

I held the heavy oak beam in position to see how high I wanted it. A bit difficult on your own but I came to a decision. And then put in the supports first. They would be fitted with hangers and then hooked over a screw in the wall. I managed to get them in pretty much level! One job down.

Then the beam. I lay it on the supports and drew on the wall where the screws had to go. And then drilled the holes! Just hoping it would be accurate enough. It wasn't. The screws were a bit adjustable but not much. I couldn't get it to fit! And I took the coward's escape. I just hung it on two out of the three screws. These two I could manage to match up! And well, it still had the supports. I think it works. And it is more or less level.

When I stepped back I noticed it is actually hovering above the supports. But it was hard to get it right that precisely! I hope I stop noticing it. But for now I won't worry about it and just enjoy my beam! And I now also had a place for my self-made tea lights... 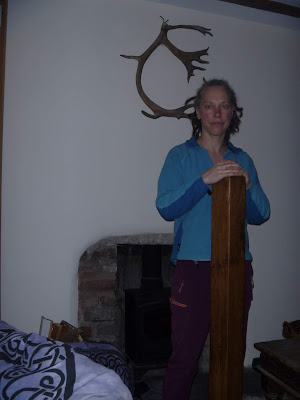 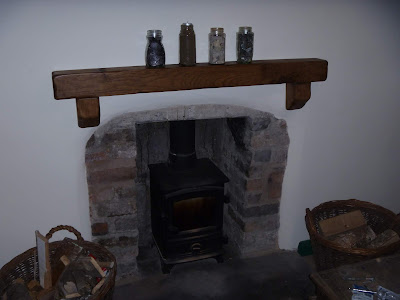