Only a year ago I put my new phone into use. I had had an iPhone for reasons I did not remember. Now I would experience a different brand; Samsung. And I'm not impressed! The memory is tiny, and if you shove an extra SD card in you can't actually move (most of) the apps across so it doesn't help. And the battery doesn't last either. The Welsh Dictionary app works clumsily. And quite soon it started to have issues with Gmail and the camera. If you would try to use them the phone would just say 'unfortunately, Gmail has stopped working' or words to that effect. And then it started with outlook too! I had already started to take my old phone back into use; that has a working camera and working email. And lots of useful apps. And it was the phone I kept nearby anyway when I would be reading a Welsh book. But when it at some point the new phone just cut out altogether and needed rebooting I had enough and moved the SIM card back to the old iPhone. A bit silly that this 2015 model does better than the 2017 one. As soon as I'm up for an upgrade I think I'll go back to Apple again. I don't like how they roll but they can clearly make phones! 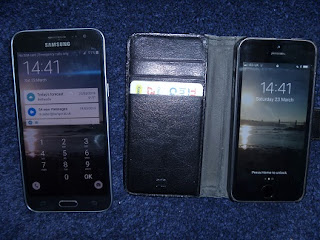