I had taken my bedroom into use two weeks ago. But it was still strangely empty! And my kitchen was strangely full. It was time to do something about that. What needed to happen was that the wardrobe should go into the bedroom, but I needed help with that.

The wardrobe had started out in the living room, but that was a bad idea. The walls, ceiling and floor all had to be done so you can't have a clunky piece of furniture in there! It had moved before I had, so when I came over with the rest of my stuff, and David helping me, he helped me to move it downstairs. But not over the stairs; sometimes it's very useful if you house has road level entrances on more than one level...

The basement is not a practical place to keep your clothes if you sleep on the top floor but what can one do. I had initially meant for it to go upstairs to the bedroom, but then decided against. Too difficult, especially if it would have to come down anyway after I'd move into the master bedroom!

The wardrobe had spent most of the year in the downstairs storage; when it had to leave that because for floor-painting it had moved to the kitchen. Jason helped me with that as he was there on sofa business anyway! But that was an awkward place for it to be. Especially as I now parked my bike in the storage; I have to slalom past the wardrobe to get there.

By then the time the wardrobe went into the kitchen the carpet for the master bedroom was imminent; soon I could start using that bedroom! And it had plenty of space for that wardrobe. And then I took it into use but couldn't really get the wardrobe there on my own. I managed to get it into my previous house on my own, but this trip would involve a rather steep slope, and then coarse gravel. I would have needed the dolly and that gets stuck in the gravel! I know that as I have used it before to transport my lintel, some slate slabs and some radiators.

After it could be moved I had Martin, Fran and Laura visiting but it didn't seem a good time to do it. Martin sort of volunteered (or rather, was volunteered by his wife) but it was dark, they came for dinner, and if we would start lugging the thing around we might miss Laura's arrival. Or have her run us over, wardrobe included. And by the time Laura arrived it rained and we were hungry. I figured I would have visitors again!

Then Phil and Chris would pop by for a small mine trip. Excellent! I warned them I would ask them to help me with this. They were fine with that. After we did our little scamper, and had had coffee with flapjacks, we got to it. And when I say 'we' this is rather metaphoric; the men pretty much did it without my help. That might have been a bit much I was glad it got done. A big improvement to both kitchen and bedroom! And I think it's a very collaborative piece of furniture; it had most of the ThursdayNighters interfering with it at some point. I'm sure Ed has helped me with it too but I couldn't find evidence of that! 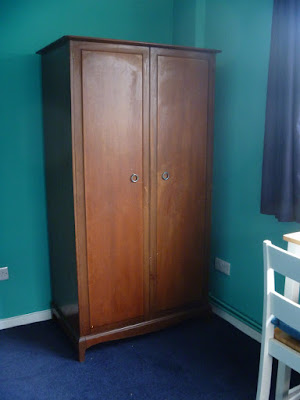