I had really enjoyed eating from my garden in summer and autumn. There was so much fruit! My attempts at growing vegetables too were not very successful, but this was my first year and I'm sure I'll improve. But there was one category of food that wasn't originally there, and which I thought would be nice to try to grow. Nuts!

I like nuts. I figured a nut tree would complement the garden! And it seems that there is a proverb that says that the best time to plant a tree is 20 years ago, and the second best time to do it is now. So I went looking for a merchant of nut trees and found just that.

When I posted a question on the website I was promptly phoned by a man with a plum accent. He recommended I buy two. (Of course he would!) I thought why not. They would not deliver the trees for a while but we sorted the details.

I expected the trees in January but nothing happened. I asked when they would arrive; the answer was mid February. OK! But mid February came and went. I mailed again. It turned out the business had been busy and they were a bit behind. But he would process my trees soon! And he did; that Thursday I found a note in the door. I had not been home. True!

I picked up the parcel from a nearby delivery centre (which was in a very unexpected place; down the tiniest and obscurest of country roads), took it home, and dug the trees into the ground. I say trees; they are pretty much sticks with roots! But that should sort itself out. I don't expect walnuts anytime soon but I hope the trees survive the trip from Kent and will grow into healthy young trees with branches and leaves soon! 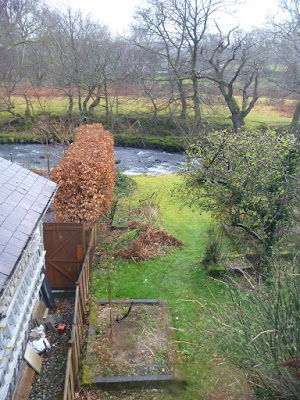 The stick-like trees in position (see arrows), being liberally watered by nature!
Posted by Margot at 08:32