Lovely day in the field

It would be alright on the night! Or rather, on the morning. I had done this field trip many times before but this was the first time I was responsible for it. And I was a bit nervous! There had been a bit of a difficult situation as around this time another field course runs, and timetabling that trip had sort of not worked due to the person responsible being ill and nobody acting fast enough to sort it in her place. This had lead to it having to be shoe-horned in, and that meant it overlapped with our trip. Two of the staff that would be on our trip were now on theirs! And I had a demonstrator (a MSc student earning some money on the side) had to pull out at the last minute. Oh dear. Would we manage?

In the morning I drove to Bangor. There already were quite some students gathered! In the sun. So far all was promising. But no bus to be seen. It appeared, though; or rather, two of them did. We loaded up the students and went. At Ogwen Cottage we met the other staff (they all had reason for not travelling on the bus) and we were ready to divvy up the students and go! There were 5 staff and 60 students so 12 each and that works out quite well. We could manage without all these people that hadn't been able to be there! And the sun was still shining!

I took my twelve around the lake and I was really feeling the science. Sometimes these things just get better the more often you do them! No chance of me getting bored with the material. We were in Cwm Idwal, and it's a beautiful glacial cwm (corrie for the Scots) with roches moutonnées, moraines, erratics and whatnot; at the same time, it had relics of violently explosive volcanism, and lavas of two completely different compositions. And the head of the valley is a textbook syncline. It also had a lot of history; Darwin's first publication was on this valley! All these finches and worms and whatnot came later.

We even saw some rather handsome goats! And we were back at the bus on time. And we didn't lose any students. It was altogether a very good morning in the field, as far as I am concerned! Bring on the trip to Red Wharf Bay... 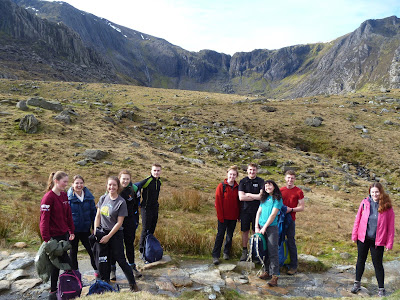 My group of students (syncline in the background) 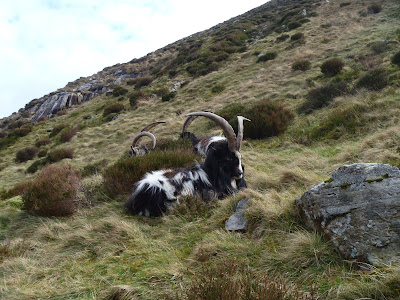 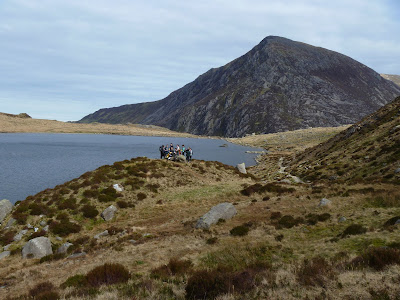 Another group on a moraine, Pen yr Ole Wen in the background 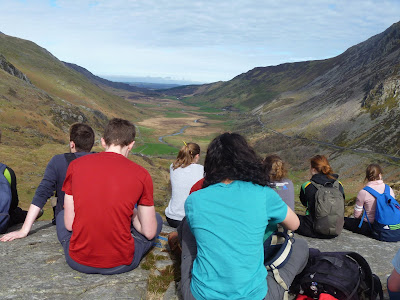