In the summer of 2013 I decided to enter the 21st century and connect my house to broadband. And the broadband moved with me to Menai Bridge, and then to Bethesda. But things associated to the 21st century are often not built to last. And I think my router wasn't! In Menai Bridge it occasionally switched itself off. A nuisance, but no big deal. But it got worse and worse. Instead of having to switch it back on once every few weeks I now often had to do it several times a day! And that just isn't funny anymore. So I first contacted the provider online. Nothing happened. Then I phoned them. And  the bloke on the other side agreed that maybe it was time for a new router. And it got sent! I hope that means it will soon work as it should again. I will sometimes want to work at home! For instance, if I have a lecture at, say, 11 in Bangor, and I find it more efficient to work at home before biking there, rather than biking to Menai Bridge first, and then back to Bangor for the lecture. And then back again. 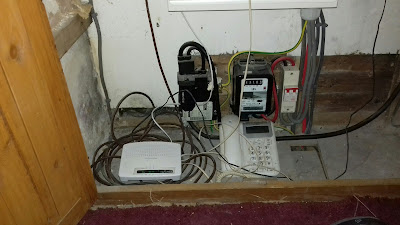 An increasingly rare sight: the router with the lights on

I first made a new shelf for it; the cupboard it lives in used to have one, but when the electrician put a new consumer unit in he had to take it out, as the new unit was too big. I put the new one up a few inches lower. And then it was time to install the new thing! 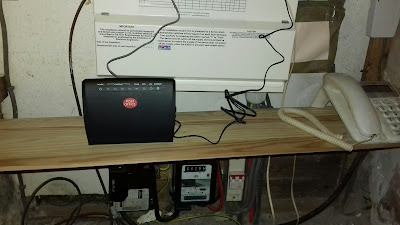 
It's quite easy. It's plug and play! The shelf was a lot more work. And now let's hope this one will give me nice uninterrupted internet access for years to come!