Months ago I started a crafts project! And then it went on hold as the entire house became my crafts project. I had decided to fill some empty instant coffee jars with house-related rubble and thus turning them into tea light holders. I had one back then, filled with the rubble the electrician had cut out of the wall. But the tiler gave me the next push (unknowingly). He had left some tile cut-offs, and as they were natural stone, I figured they'd make nice stone lumps for in a jar if I would smash them up. So I did! And while I was at it I filled another jar with sand the plasterer had left, and a last one with bits of slate that had fallen off the lintel in transport. The point of slate is that it flakes a bit! So now I have four house-themed tea lights! I like it. 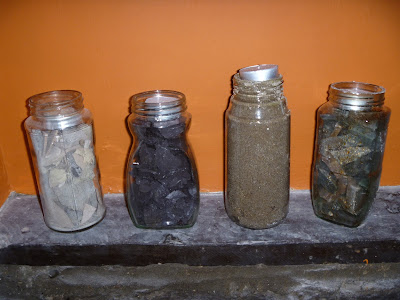