Jaco and Marjan had tried out the house. With success, I would say! And I was enjoying this new episode of being sociable and invited more people. Close to Christmas, one of my colleagues, Martin, always organises a social do at his place, up the hill from me in Gerlan. I tend not to blog about it as I never take pictures and around that time, there is always a lot on but I mentioned it in the context of walking past a house I would like to view after his do. That had been the 2017 one! And during the 2018 one I had asked if he an his wife would want to come and try out the house when it would be sort of finished. And they were! And I thought it would be nice to also ask our relatively new colleague Laura; she had started working with us in autumn but only a month ago she had moved to nearby Tregarth. And she was up for it!

I realised I would have to prepare for this one. I had suggested the date of an Open Day. These things are best on a Saturday so you can go to bed early on Sunday. But the Open Days end at half past three, and then we need to tidy up, so I tend not to leave until four. And I didn't have a car! So I would only be home at five. And they'd be there at half past six! Cooking for four, and getting nibblies ready, and changing from your sweaty bike clothes into something more socially acceptable altogether takes some time. So on the Friday I did a lot of prep work.And both Martin and Fran and Laura had offered to bring something. Martin and Fran would bring salad and Laura a desert. Great! I would make vegetarian lasagna.

On the day I saw I was early, so I did shopping for nibblies before the Open Day. I thought big town Menai Bridge with its Waitrose would have better ones! And that I would have to bike it back was just one of those things. I got home at five and started cooking and otherwise getting ready. And I was on the couch with a newspaper when there was a knock on the door! It was Martin and Fran! Martin with a salad and Fran with flowers. That was sweet! I showed them the house and they liked it. They figured it was quirky! And there was just enough daylight for them to get a glimpse of the garden. Then I offered them a drink. No sign of Laura yet! Oh dear. But just as we wondered if she was lost or something, car headlights shone into the living room. Laura! And she brought a beautiful cake.

We were complete! We had a chat over drinks and nibblies, and after a while I suggested we go to the kitchen for dinner. And after dinner we reversed that movement. Time to light the woodstove!

It was really nice! They stayed until half past eleven. Blimey I am wild. We even polished off two beers and an entire bottle of wine! I am clearly a lightweight because as soon as they had all left I didn't know how quickly I should get to bed. Getting up the next morning was a bit slow! But it had been good! And hopefully, I would have yet more guests a week later. I am enjoying this! 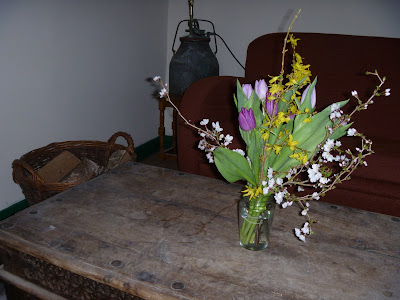