Some time ago one of the ThursdayNighters, Chris, had told me of some mining relics on the river. Not very far from where I live! He had suggested we go and have a look one day.

Phil basically beats a path to my door and he had suggested we go and check it out with the tree of us. Sounded good! And he had suggested one Sunday. Unfortunately, that Saturday the heavens had opened and the river had been extremely high. There had been serious flooding of the nearby river Conwy! And by Sunday teh levels had dropped, but not enough to make a scamper along the river a good idea. So we went in another direction: Chris was permanently looking for an adit above Rachub he thought he had seen decades ago and that he had been searching for ever since.

The men appeared and we got ready to go. We walked up the hill, with Millie up front (Phil had brought the dog!); she is always very keen. And we found lots of interesting things! But not the adit Chris had hoped to find. Oh well. We got some fresh air and some exercise (I had started to feel a bit exercise-starved due to very little cycling associated with Storm Gareth and other high winds, although I had already sorted that by doing my run before the men appeared) and the dog had a good time. And the company was good! 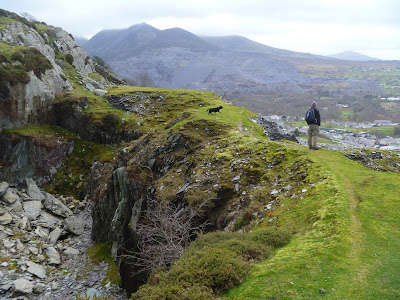 Millie and Phil at the edge of a quarry 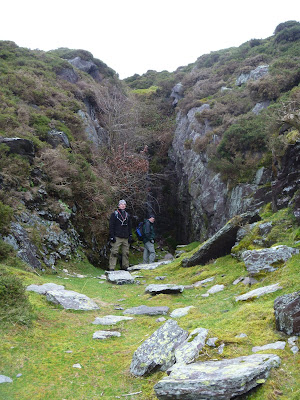 Phil and Chris at a cutting in the rock

When it started to rain after we were done exploring the Nth adit we decided to go home. There we had a coffee (with Chris-made flapjacks!) and then the men helped me with a chore I will blog about separately! And by about half past one I had my house to myself again. It was good somebody dragged me out; I hadn't been in the hills much lately! Only my late afternoon stroll to Dinorwic...
Posted by Margot at 08:11