I had been looking forward to sleeping at the back of the house since I moved in! The idea of listening to the river rather than the sounds of the village (quite often not much, but I am within earshot of a hall where concerts are held, and the back of two pubs) was quite appealing. And being close to the bathroom would be a nice bonus. So when I had got carpet on Tuesday, I bought curtains on Wednesday, installed them on Saturday, and decided to sleep in the room that very night. So I lugged down my bed! And some paraphernalia.

It wasn't an unequivocal success! I had been sleeping in my double bed with the winter duvet on. And that duvet means business! In comparison, the duvet of the single bed is the lightest flutter of taffeta. I had tried to compensate for that by wearing a long-sleeve shirt but it wasn't enough. I was cold! Too cold for a proper night sleep, not cold enough to not be able to sleep and then do something about it. But that only meant I had badly chosen bedding. I tried again the next night with more clothes and an extra blanket! But the listening to the river had been lovely. And I had been scared the room would already be too warm, but that clearly wasn't the case yet. I probably will be in summer, but then I can still go back upstairs! 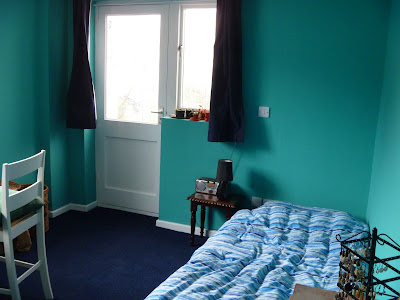