The ball was in my court! I had to find a piece of slate for the living room hearth. That didn't sound difficult. Until the dimensions needed came through! I needed a T-shaped slab of 122 by 102 cm with two big corners cut out.  That's big! And it could also be laid as either two bits (the stem and the roof of the T) or even in three (the roof of the T would still be huge; 66 x 122 cm, so maybe do that in two bits) but the fewer the prettier.

I live next to Penrhyn Quarry and hang out (with a bloke who has all the tools) in Cwmorthin Slate Mine all the time, so I could try to find something and cut it to size. But when my father had been rummaging around in the garden he mentiooned there had been a seating are in a strange corner; there was slate on the floor. I had noticed a standy-uppy slab (57 x 122 cm so not even big enough for the roof of the T) but I had not really paid attention to the slate on the floor. But maybe it would be worth it! So one day I did. And I pulled out what clearly had been a hearth! Two big slabs, 46 x 122, with an elegant round corner cut out and two holes on the other side. Altogether these slabs should do! And I'm sure they are local slate. 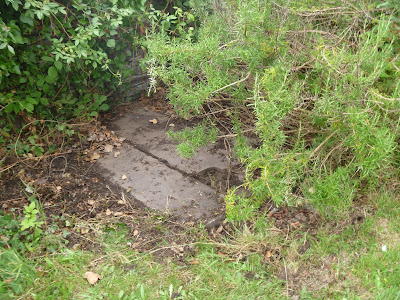 The overgrown seating area; one slab is removed but you can't even tell 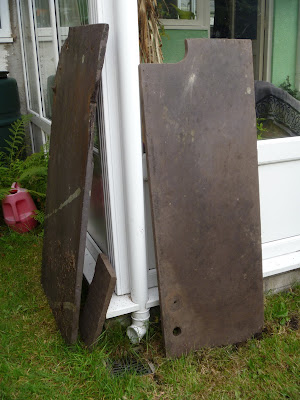