I figured I should go for a bit of a walk over the weekend! And I thought of the little trial levels up the valley. And I had asked one of the underground chaps, Chris, to join me. We had gone for a walk before and that was nice. And he was available!

He came to my house and we had a coffee first. Then we set off. Chris knows everything there is to know about the local mines (and other industrial archaeology, and geology, and more things) so basically, from there on I could juts follow him and have my head filled with local knowledge. He knew, for instance, what that strange leat was for that runs in the hills above the village. It used to go from Afon Wen to Bryn Hafod y Wern slate quarry. That quarry was in use during the Great Strike, but some of the land it crossed was owned by Penrhyn Quarry, so they blocked it, and it couldn't be used. And that seems to have been it for Bryn Hafod y Wern. Oh dear!

The other leat, in the Ogwen Valley, seems to have provided water for Penrhyn itself. It must have used lots! There is water everywhere; there is a little reservoir on the other side, and there is the stream coming past it that has clearly been used for industrial purposes. But you're Penrhyn Quarry or you're not.

Anyway. We got to the first mine: Tan-y-Garth Arsenic mine. It had several entrances but they all went ratehr steeply downhill and were full of cloudy water. So no exploring there! But I knew that; if there was any underground exploration down there then either it would have been gated, or I would know about it, or both. But it was nice to have a look! 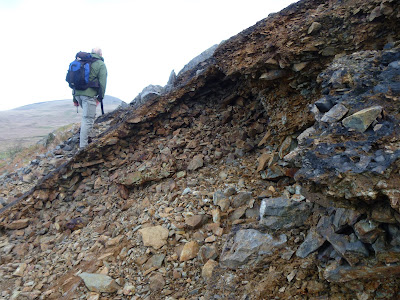 Chris on the arsenic mine spoil

Then we proceeded to Twll Garth slate mine, also known as Dr Hughes, for some reason. We came past the pretty sheepfolds there on the crest of the hill. There was a hole in the ground but no entrances. And the weather was getting nice in the meantime. 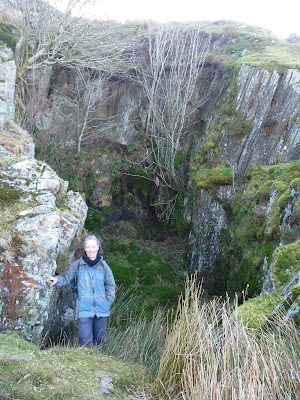 Me in front of Dr Hughes 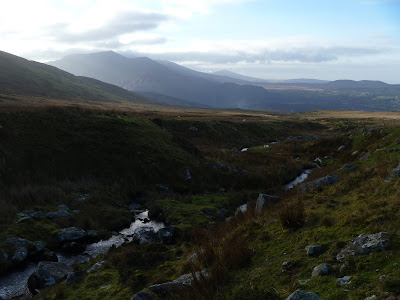 Crossing the river on the way back

We walked on to the little scars in the hillside you can see so easily from the other side (which is where you are if you start walking at Tan-y-Foel). These were Gallt-y-Mawn and y Gyrn Wigau slate trials. They we quite similar; linear scars in the hillside with waste tips below them. It seemed to have mainly been open cast. At Gallt y Mawn we had a cup of coffee. And admired the weather! It was better then we had anticipated. And after Gyrn Wigau we crossed the valley and walked back on the other side, walking past some of the slate relics above Rachub on Moel Faban, And by then we were hungry so we went home, via the shop. I decided I could bake pancakes! And I did. Not very skillfully but I did it. And then it was time to do chores again! But it had been a good day! And I am glad I now have seen the little mines above my village. Maybe next time: Bryn Hafod y Wern!
Posted by Margot at 08:59