The Thursdaynighters had had some midwinter fun. They had been out on the 27th and on New Year's Day and because I felt the pressure of marking I didn't join. And when the university opened again, I was back in the office, so I also skipped a Thursday daytrip. But then they offered the trip they had cancelled a few weeks earlier. I jumped to that occasion! It was a small mine in a beautiful valley: Chwarel Llew Twrog, and would be a modest trip. And there probably weren't very many people joining.

I knew of David and Paul coming; in theory we could have shared a car, but I feared the others would want to go for a pizza or something. After an underground trip I want my bed! So we drove separately.

I got to the agreed place as the first. I went for a leak and in that time, the others arrived. We piled into David's car (there would be little parking space where we were going). We drove up the old road to Manod; this little road is famous as the Manod Quarry has served as a depository for British art in the Second World War. The powers that were were scared it would get damaged if left in heavily blitzed London.

We put on our kit and walked up the hill. It was a cloudy night so we didn't see a thing, but I knew the valley was lovely! And we fairly soon got to an entrance. It was wide and had relics of rails; it had been well-equipped. But it was only a tunnel. No chambers, no side passages. But it did have two nice waterfalls just coming out of the walls! 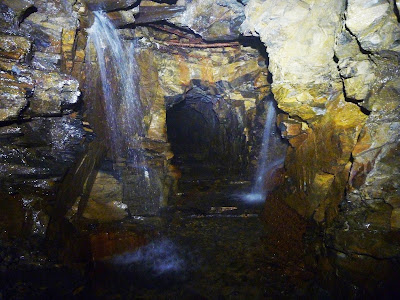 The simple level with the waterfalls

When we had seen it all (it didn't take long) we went along to the bigger venue. We walked along a wall. It was a bit slow going; there was no path, and the terrain was rocky and mossy and slippery. But we got there. And this venue was a little bit bigger! It was also a tunnel, but this time with a side passage, and a small chamber. Exciting! We looked at it all, and then sat down for a chat and a cup of tea while Paul went in to properly photograph everything. He had brought his tripod! 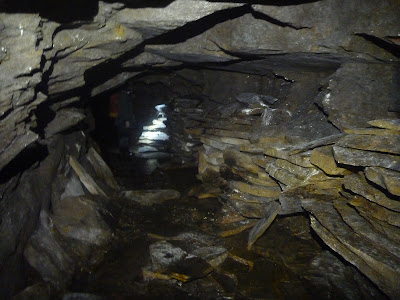 A lot of slabs stacked up along the sides, ready to be taken out in the main level

After a while Paul was done, and David's feet were getting cold. So we got out! And this time, we headed straight downhill, as we figured it would be easier to walk back along the road. And it was.

When we were done David brought me back to my car. David and Paul went to Mick for a post-trip cup of tea, but I went home. And along the way I picked up a hitchhiker who was very glad I had. He was walking to Swallow Falls from Betws-y-Coed and it was a bit further than he had imagined! So I wasn't the only one home at a decent time that night.
Posted by Margot at 09:06