I hadn't intended to sort out the bathroom anytime soon! But when the painter is coming anyway, he can just as well also do the bathroom. It's mint green, after all, even including the ceiling. But if the painter is in the bathroom I can't use it. So I hope he doesn't spend too much time in there! So it was best if I stripped the wallpaper off myself. And it was very inoffensive wallpaper, but it had featured an electric heater, and that had been disabled. The electrician wouldn't stand for electricity so close to the bath. And when I took it off I could see it had been wallpapered around. So there was a big scar in it. That meant it all had to go!

It turned out to be a double layer! And some funny chewing gum-like layer underneath. It was a lot of work to get it off! Luckily it's only one wall. And I took everything off the wall that was on it, like the medicine cabinet, the towel rack, etc. (except the radiator). That makes it easier for the painter. And for me, stripping the wallpaper.

I did damage the plaster a bit doing that. A few small patches I will be able to fill up with filler, and then some bigger stuff that is a bit worrying. That was right next to the bath! Must have had some water damage. Maybe I should extend the tiling a bit. Rose left some of the tiles used! And they're not very beautiful and in the long run, maybe the whole bathroom should be redone, but that is a later concern. Let's get things up to scratch paint-wise now. Then I can see in some years from now if I want to do more drastic things!

The plasterer had to come back to plaster the staircase. On one side, it was just plasterboard, that had been wallpapered over. And I had pulled the wallpaper down (with help). But painting straight over the plasterboard isn't a good idea. It would look silly! So the plasterer came back, in the nick of time, and did that. And filled the holes I had made in the bathroom wall! That was one worry fewer.

I also washed the skirting boards and the radiator and the ceiling. Using the steamer on the wall has alerted me to the nicotine on the ceiling! I hope Rose didn't smoke in the bathroom but if she smoked elsewhere the smoke probably drifted in. When the steamer created droplets on the ceiling they were brown. Oh dear!

Once the painter gets started I suppose he may be there only during working hours, and then I'm not home, but still. If he is anything like the plasterers then he'll be there from early to late! And he can spend as much time as he wants on what will be the master bedroom; I can happily stay out of that room for days on end. But I can't avoid the bathroom! Not without treading roughshod on some social norms... 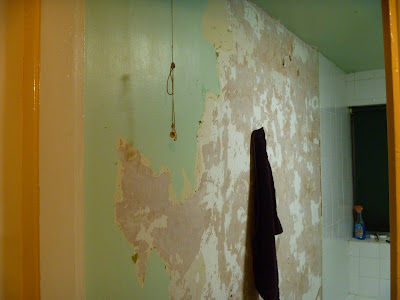 more removal of mint green
Posted by Margot at 10:21