I'd never put a skirting board anywhere! It's just one of those things you never do when you rent. And there's not much to it; you just screw a bit of wood to the bottom of the wall. But doing it was a first!

I first had to get rid of a remnant of the old skirting board. The wall in the landing with my fireplace in it needed some work; with ripping out the old open fireplace, any skirting board had been ripped out as well. There still was one piece left, but the local timber merchant didn't have any matching skirting board on offer, so I decided to rip that out of the wall and put entirely new stuff in. And it wasn't easy to get rid of the old stuff! It turned out to be fixed with four Victorian nails. That's a bit much! And there was no way I could pull these out of the wall so just crowbarred the wood off the nails, and cut these off with my Dremel. And then I sawed my new purchase to size and screwed it into position. I suppose if I were a joiner I would have made the edges match the surroundings more but I'm not. It's good enough for me! Bring on the next challenge. 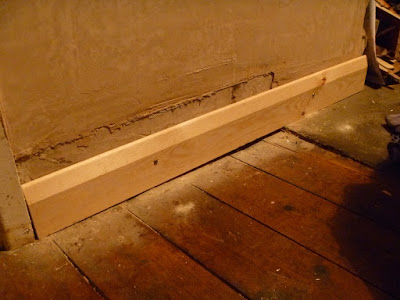 I think the plastering behind it needs some polyfilla! That'll teach me doing the skirting boards after the plasterer has been... (or at least not removing the old stuff before the plasterer came)
Posted by Margot at 16:18