Doesn't time fly! I set out to finish a task I thought I had paused recently, but looking it up i realised that had been in summer.

I had decided I should do all the dirty jobs in the living room before the painter would come in. Once he's done I want to have the joiner in there as soon as I can, and then when the floor is in situ I should be able to just furnish the place and use it. And then I don't want to have to do chores that make a mess and require me lugging my working platform through the room.

I had decided I should try to just saw off the nails that had been keeping the plasterboard in place, and then try to remove the wallpaper by flossing the gap with a rag soaked in water with wallpaper remover. And then scrape at it with a putty knife. And then try to get the remaining plaster off with an old toothbrush. It had come off with a hard brush on the rest of the beams; this seemed like the sort of tool that would do it! And it worked rather well. It was a lot of faff but I am content now. Bring on the painter! 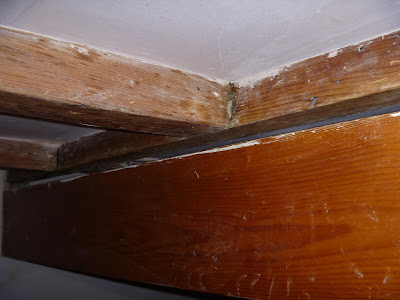 Looking rather neat!
Posted by Margot at 10:55