One of my stoves stands in a room that's furnished with a working platform and lots of buckets and trowels the plasterer left. The painter said the staircase needed plastering too! So he left some as he is not quite done. But anyway; it's not a homely space. I don't sit down there to relax. So its new stove is still virginal. But in the landing, I have put it to use! It is late December; a fine time to burn some fuel. And stare into the flames. And maybe read a book.

I had burned it once before heading to the Netherlands. But upon coming back, I had more time! And I used it. And the stove works a treat! At some point, a bit too much: I had been warned to build it up slowly, as new stoves fume. Not the fuel, but the stoves itself. You have to slowly burn off the newness! And I went a bit too fast it seems; even though no smoke was visible I set off the fire alarm. Oh dear. What a racket. And I hadn't put an awful lot of fuel in! But clearly the stove had got too hot too quickly and the fumes got out of hand. It did smell iffy, that's for sure. But an opened window solved the problem. I think I can burn it a bit higher now! I hope the worst is over now. 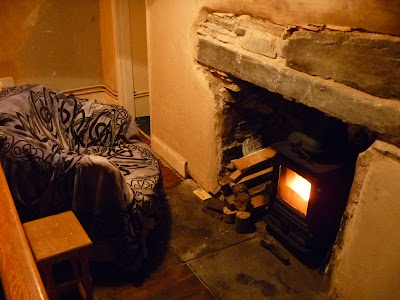 I have also started burning off a lot of the random clumps of wood Rose had left me in the garage. I had bought a new bow saw not too long ago and that gets through all that stuff with relative ease. So I can tidy that up! That will make space. And all the while the wood that came out of the garden can dry out a bit more. That will come in handy soon enough! I am also burning the slats from the lath-and-plaster. The wood doesn't burn as well with all that plaster soaked into it but it does burn. And once all is settled (rooms finished, garage with new roof) I can go and buy big loads of firewood. I don't want to now; the garage roof leaks like there's no tomorrow and I don't want to clog up the house with things like that. But once the garage is dry it can have loads of wood! I have to buy small bits though; the stoves are only small...
Posted by Margot at 07:32