Back into the hills

Since the swamp hike last October I hadn't been for a hill walk. That's three months! Way too long. So when my contract was finished, I was confident I would finish my PGCertHE on time, I figured I could again. A weekend presented itself of which the Saturday was stunningly beautiful, but taken up by James' goodbye party, so I settled for the greyer Sunday. I would be trying out new hiking boots: in my own size, without orthopedic soles! Exciting in itself.

I didn't want to go too far or too high, as I was still a bit under the weather, and the weather was on the mountains; I picked a valley I had seen from a distance but not 'done' yet. I had noticed a line on the other side of the valley from this walk; I might have mistaken it for a path or a tramway. I decided there that I wanted to go there too. I had later come close but still not quite done it.

Now I drove to Rachub, took five hours to find somewhere to park, and set off. It was a nice morning! A bit grey, but that suits the landscape. Soon I was in the valley you have to cross to get into the valley that was my destination: Cwm Caseg. From the other side I had a nice view on the first part of my walk of almost one and a half years ago. Later the two valleys separated. This one was as empty as the previous one! There were some hut circles, and a sheep fold. That was about it. 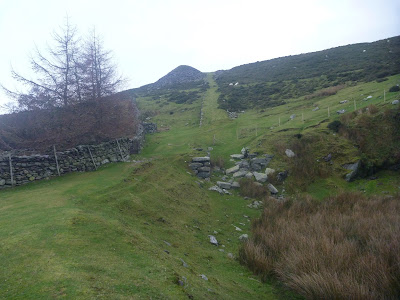 Just outside Rachub the slate industry past is still very evident 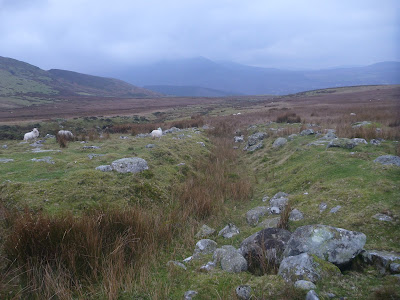 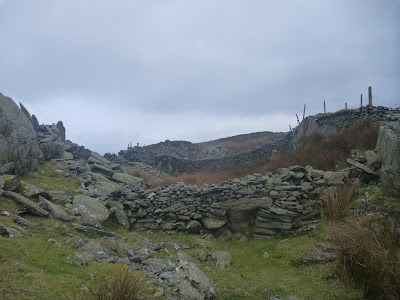 A nice sheep fold on the crest of the hill 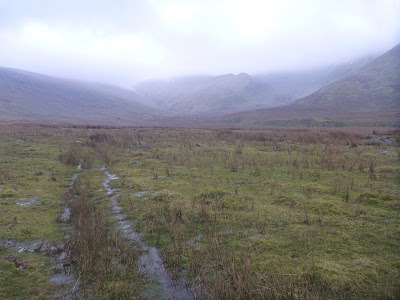 Heading higher up in the valley


Where the path stopped on the map I saw something went on. A tramway? No, a leat! That's nice. I followed that into the cirque at the head of the valley. It clearly was a potentially soggy route, but it was close to freezing, so the ground was still quite hard. In the cirque there was quite a lot of ice on the ground. Nice! 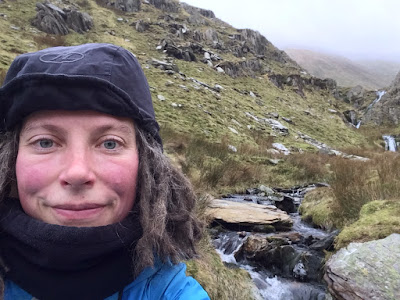 Selfie by a stream

Near a pretty stream I had lunch. Then I headed back. The clouds were coming down a bit and the views were therefore not improving. I followed the leat to where I had found it, and realised the line on the mountain side I had seen before was that very same leat. Why had it been worth digging that? There isn't, and wasn't, much happening higher up in the valley by the looks of it...

I followed the leat back so as to have a different route as the way in, and to satisfy my curiosity. Soon I was back in the valley I had to cross. A helicopter seemed to be looking for someone in there. Not me!

I got back to Rachub, where I encountered some people who were trying to load a big fridge into a car. I gave them a hand. And got flirted at by their Border Collie. Good times!

It had been a nice trip. I was back at the car a bit after 2pm. I'd been out for some five hours, and my feet were fine. Great! Not that I had expected anything else. These feet of mine are doing well!
Posted by Margot at 09:19