I had had an eye on Cwm Pennant for a while! I had tried to get there to go for a run once and ended up elsewhere,  I had managed to go running there but had lost my intended route, and I had seen it from the east, north and west. And now an opportunity to see some more of it, some of it underground, arose. Miles was otherwise engaged on a Thursday night and I went with the Thursdaynighters, who were doing two mines in, you guessed it, Cwm Pennant.

I hitched a ride with Ed. It was a beautiful day! And the valley was stunning. Luckily we had a photographer with us. It turned out there were only four of us: David, Ed, Jason and me. We got kitted up! I decided to wear just my outdoor clothes (as I had done the Saturday before) as the night was too warm to wear full caving kit. The men thought otherwise.

David decided to check the length of the rope first. It was supposed to be a long pitch! But the rope was almost 90m so it should be fine. We started up the hill! 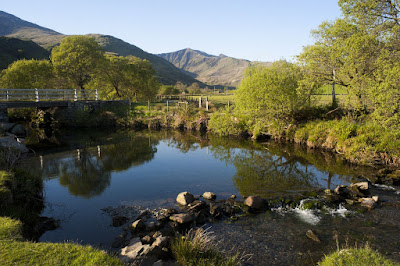 All pics by David unless otherwise indicated 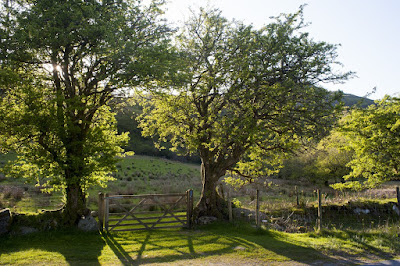 Quickly we had found the entrance. David went in, crossed a stope on a plank, and started rigging. We would first drop the pitch, then walk back up, retrieve the rope, and then walk higher up the hill to the mine up there.  When it was rigged David asked if I wanted to go first. That was fine with me! 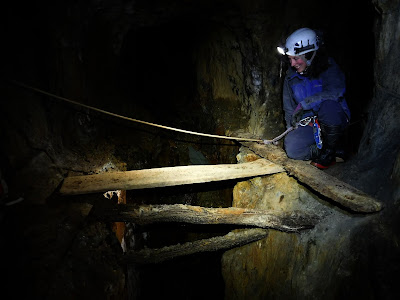 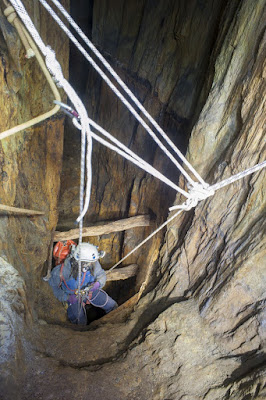 I went down, although I quickly realised I wasn't wearing my knee pads. Oh dear! Too lightly dressed. I made sure to be careful at overhangs. I also had forgot my eh, my donkey dick. The device from which you hang your bag on a pitch. If you carry it on your back you might not fit through tight bits! But I went. David was worried about throwing the rope down on the wrong side of some stemples, but he solved that by keeping one half of the rope up there. We would at worst have to pull up half! And throw it down the other side of a stemple.

The pitch went all over the place. Down, then a bit around, through a gap, past a wooden platform and then a rock platform, then over a scree slope and around the corner into a winze. A bit of a faff! I had to take the bag off for the gap, and I was getting worried I would lose voice contact with the top. There was some discussion about the rope. When I had passed the rock platform I figured I probably needed the other half of the rope too. David released it, but of course, it didn't reach me. I pulled it to try to persuade it down, but that was a bit scary as it send rocks flying down. And it gave a bit but not all the way. I would have had to climb back up to retrieve it!

I hadn't really put my SRT kit on with care. Everything was in the wrong order! I should know better. So I messily prussicked up and retrieved the rope. Good; I could go down again. The platform did throw stuff at me but I vanished around the corner. And then I touched down. I managed to shout loud enough to David the rope was free.

I had a little wander into the hillside. I knew the adit wouldn't lead anywhere; indeed, it was a dead end. But now I'd seen it! And it was quite pretty. I then went back to wait for the next person. That was Jason. He came down relieved. He wasn't all too happy with the things that could have fallen on his head! And together we waited for Ed. His was the same story! But we were all down safely. And soon, so was David. We flaked the rope so we minimised the chances of it snagging when we would try to pull it up. Then we went out! The water in the adit overtopped my boots. Oh well. 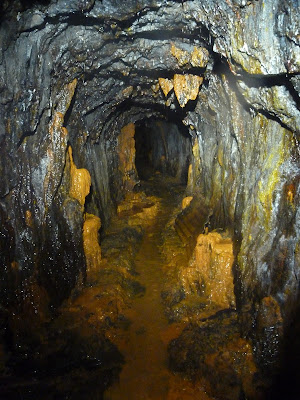 Towards the dead end; pic by me 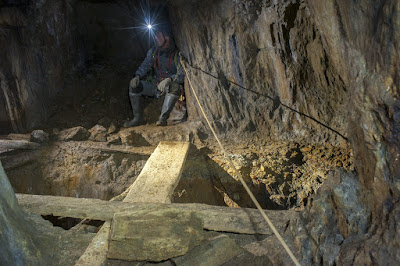 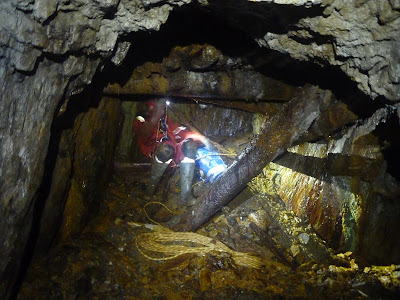 Ed touches down; pic by me


The first thing we did was scamper back up the hillside, and walk back in to get the rope back. That worked! It didn't snag. Great! Then we walked out again. I walked my bag to the path that continued up the hill. I didn't intend to carry all that to the next mine! I had my hat on my head and my camera in my pocket. What more does one need?

I scampered ahead and saw another hole in the ground. Cool! It was a solid SRT job, though, so we wouldn't go in. When David got up he pointed out he knew what was in there. Then we walked a bit higher. The views were amazing! It was a sultry evening and Cwm Pennant is lovely. And it got even better when I saw a waterwheel. Cool! We walked up to it. All of us, in spite of Ed having been overtraining recently, and having a sore knee. 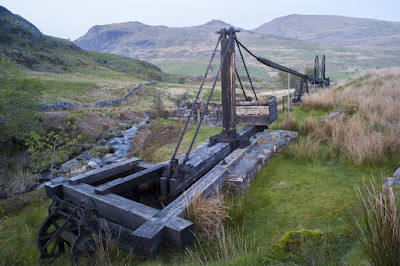 The waterwheel with pump rods, balance bob, and rising main.

The waterwheel was a beauty! We had a good look. And we sat down for a sandwich. I had left mine (bad planning) but Jason gave me a bit of his pie. And then we walked back! A successful evening! 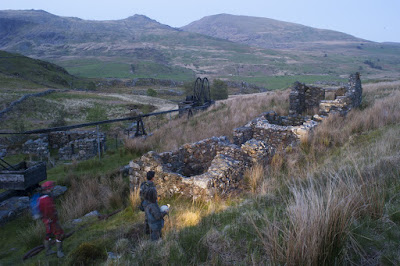