I hadn't climbed in a bit! The previous week I had only just come back from the Netherlands, and the week before we had had the AGM after which there was opportunity to climb, but I was knackered and I went home. And then this week the evenings were long enough and the weather was good enough to go outside! And I know Eifion always picks a crag that has no challenges for the first night out, but I figured it would be nice to catch up with people and sit on a rock in the sun.

I hadn't been to this crag, Lion Rock; but I knew the nearby Craig yr Undeb and I knew which way the wind was blowing. I met up with Eirian on a nearby parking lot as I wasn't quite sure where Lion Rock was, and it was a lovely night.

We walked up together, and I could hear the clanging of gear. That must be the others! They had already set up three top ropes. Glyn was already free-climbing one of the routes. I got into my gear and the climbing could start! I did one of the routes; indeed a bit of a doddle. Then I got ready to do another one, but my belayer was called away, so I free-climbed it. I then free-climbed the third. Sorted! But by then a fourth rope had been put in and that was in a slightly better position. 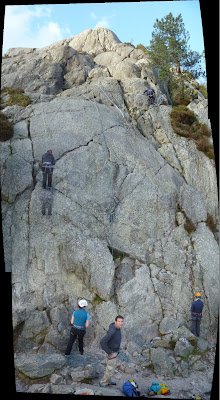 It was a bit better but not much. Glyn did this route with one hand. But I had come mentally prepared, and I was also quite happy to sit in the sun, eat a carrot, and enjoy the views and the company! It really was a lovely place to be on a sunny evening. I also got to meet a guy who had climbed with Glyn before and might join the club: Kemal. I hope he wasn't put off by the low level of the climbs! 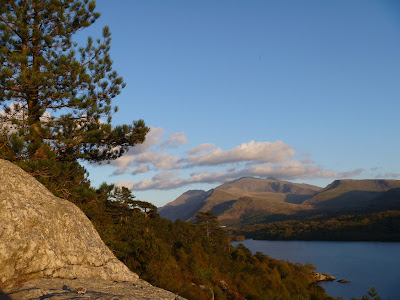 After a while I clambered up the rock again to de-rig the first three ropes; we had all tried these routes. And not very late we packed the rest up too and went home. Not a proper climbing evening but a nice one anyway!
Posted by Margot at 07:56