I've been using the Single Rope Technique since 2009. I've always managed whatever rope work that was expected of me. Sometimes with some effort, but I always got there. I started out on a set-up that I had used on a Norwegian Glacier, which wasn't a particularly good idea, but with which I managed in the southwest. Then I moved to Yorkshire, and that meant stepping up my game. I bought me a proper caving harness with all accoutrements! And got on with it.

Sometimes you see people prussick up a rope effortlessly. It never is for me! I have had the sense my set-up wasn't very good for many years. I always get there but I think I use my arms too much. I was hoping for an opportunity to have someone look at that and suggest improvements. At Cave Rescue exercises that never happened. Sometimes an SRT course was advertised, but the last time someone told me I should step back and let people who needed it more have the place. Fair enough.

Then, suddenly, someone mentioned he was registered for a course this autumn but had had to pull out. I mailed the instructor: could I have his place? I could! I made sure I had finished all I needed to have finished and went.

I got to Plas-y-Brenin at the same time as some bloke who turned out to be coming for the same thing. We told the receptionist we were here for the SRT course and she advised us to go to the bar and have a coffee, and wait for the instructor. We did. Nobody appeared.

After a while I started rummaging through my emails; had the bloke left his phone number? The other participant, Paul, went back to the reception. And found Rich, the instructor! He had been in the climbing hall all this time, wondering where we were. Oh dear! He introduced us to his trainee-cum-colleague Lisa. Then we could start! It was only Paul and me... Rich first set up Paul and I changed my set-up a bit to match that. There is a logic behind having your kit in a certain order!

I went up one of the ropes. At the top I had to get onto a traverse line onto a platform. That showed me whether my cowstails and my other dangly bits were the right length. Some were a bit too long! But I first went down again. Rich told me to do that it a slightly tidier way than I usually do. Then I went up and down again. And adjusted my stuff. Lisa looked after Paul. 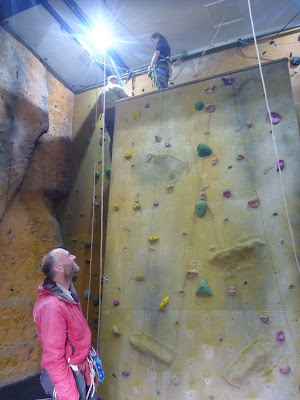 Rich, Paul and Lisa in the small climbing hall

Then Rich added a deviation. And then an awkward deviation. Then an adjustable deviation. And then a re-belay. Then he lent me a foot ascender to see if I liked that. I had once had one but quite soon lost it. This time I quite liked it! Maybe I should buy one again. Then he suggested I lose a karabiner from my kit. And then he rigged me a continuous rope so I could feel the difference.

After all that scampering up and down it was time for lunch. I had forgot my sandwiches so I bought soup in the bar. Nice!

After lunch we went back. Rich rigged me a purposefully awkward route with ups, downs, traverses, re-belays and deviations. I did it clockwise! And then came back counterclockwise! And then he suggested I de-rig it. That was hard! If you have to get a traverse line off a bolt you can only be fixed to the next bolt along, so it can be hard to reach. Some of that required him shouting advice! And a rest. But I got there.

The last exercise was passing damage on a rope, both up and down. That was cool! But then time ran out and we had to evacuate the space for the next group.

I had learned a lot! And maybe I lost some of my bad habits. And it had been fun! We said goodbye to each other. It had been a good day!

I spite of it being a bit of a damp day I decided to go for a small walk as I hadn't been out in nature much recently. Luckily, Plas-y-Brenin is at a lovely location. I scampered up Creigiau'r Gelli a bit, and sat down, in the rain, to eat an apple and drink some water. Then I went back. A good day! And I have the bruises to remind me... 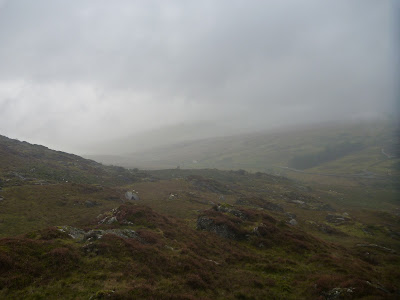 View into the Ogwen Valley 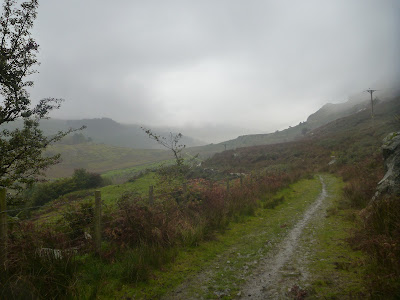 Walking back to Plas-y-Brenin
Posted by Margot at 10:28