I had decided my ceiling certainly had rafters. And I wanted to see them! So I had drilled a little hole in the ceiling that was there, and had decided it was plasterboard. It would have to go! But the edges were decorated by woodwork and that woodwork was integrated in different woodwork and I just couldn't decide where to start. All easy edges had been hidden!

Then I went underground with my sister and her family, and Phil and Jason. I hitched a ride from Phil. That meant on the way back he would pop by my house. He offered to knock a hole in my ceiling! I accepted that. That would get the work started!

He was as good as his word. He took a hammer from his car and clobbered a hole in the ceiling. Plaster came crashing down! And to my surprise, the beams ran front to back rather than sideways. And they were covered in - something. I dragged a step ladder in and had a closer look. It was layer upon layer of wallpaper! On beams? Why? The lowest layer was even a layer of wood structure wallpaper. Why would you cover wood in fake wood? And between the beams there was more plaster; it makes total sense to plaster the underside of your floorboards, but a lot of that plaster had become loose and was now only held up by the wallpaper. It'll be a bit of a job to sort this! But I'm glad it's been started. There is no way back now! And I'm sure in the end it will be great! 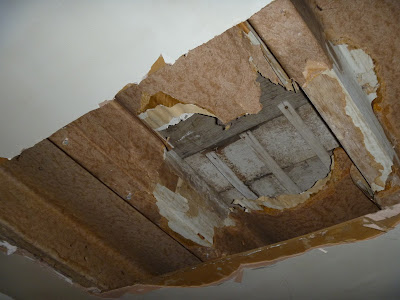 Wallpapered beams, plasterboard and bare floorboards
Posted by Margot at 10:00