Garreg Fawr with Rick and Lionel

If you drive past Betws Garmon you see a beautiful line of holes in the hill going up diagonally, with associated waste tips and a zigzag path for the miners. And some derelict buildings, like drum houses. That's Garreg Fawr, and I had had it on my to do list for a while.

During some time spent marking in the office, I got an email from my old Southwestern caving mate Rick. That was nice! He said he was coming to North Wales with Lionel and maybe Dave. Was I interested in teaming up? Of course I was!

On Thursday I got a text from Lionel. They were going for a walk in the mountains. But I was at work! I did tell them they could join either the Thursdaynighter trip, or the dig, if they wanted. Their walk was too long to fit an underground trip in afterwards, though. And on Friday I went back to work while they did a trip to a sulphur mine I hadn't yet visited. They had had a blast! But I was available to join them for dinner, in the pizza and pint place in Llanberis.

It was great to see them again! Lionel doesn't change. Rick does a bit; a few years ago he injured his achilles tendon, and that seemed to really put a damper on his mood. I can imagine! It seemed to have been a really crippling injury. But on this trip he had for the first time gone into the mountains again! He felt great about it. And I can imagine! And he always loves a nice mine or quarry.

The next day they planned to do, you guessed it, Garreg Fawr. Excelent! We agreed on a time and place to meet. So after a lovely pizza we each went our own way, knowing the fun had only started.

The next morning in Betws Garmon I saw men in a car waving at me. Rick and Lionel! I seemed to have driven past them already, oblivious, but then again, I don't recognize Lionel's car as he used to have a different one. We parked up and changed. And we decided to walk to the top and do the mine from the top down.

Rick had a terrible cold and struggled a bit walking up the hill, but we all got there. And the views were amazing! And when we got to the top of the mine that looked amazing too. Lionel rigged a rope and we descended. A rope wasn't all too necessary but it's good to have one. 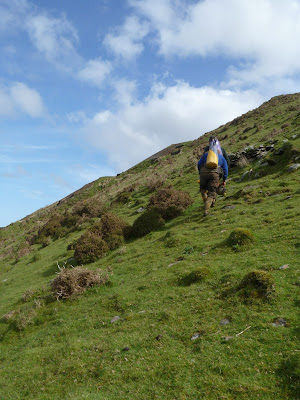 Clambering up the hill 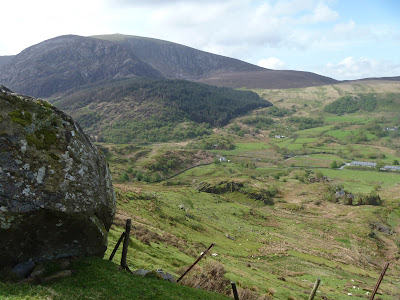 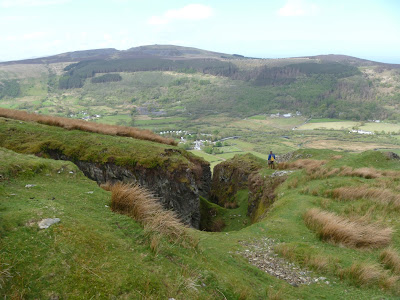 
The mine was a pillar-and-stall iron mine. Scenic! I hadn't brought a tripod, and photographing places like these from the hip doesn't tend to work too well. But we had a good time!

We managed to get about halfway down without needing a rope again, but we had to go and retrieve the one we had used. We wouldn't use it again; we saw plenty of deep drops, but you could always just walk a bit further down the hill and then find a way to just walk in.

Along the way we also found a raven nest with babies, and a lizard in a level. It was a strange level; it had painted bits of styrofoam in it, and a strange piece of scaff; my guess was that it had been a film set at some point. And a lizard was perched atop one of the pieces, in the eternal shade. We figured he had probably fallen down and was cold now! We carried him (her?) out and put the styrofoam in the sun. I don't know how long it takes a lizard to warm up! But the good thing about a cold lizard is that they make good photography models. 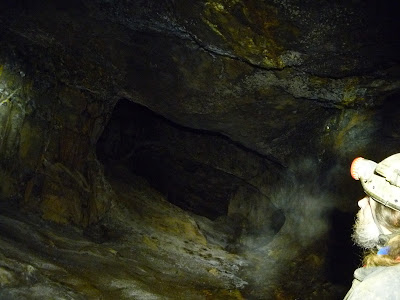 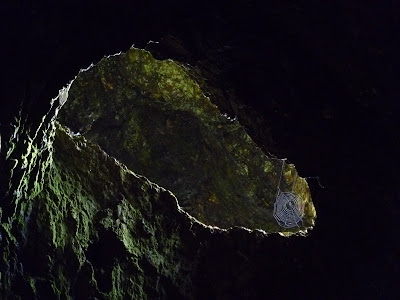 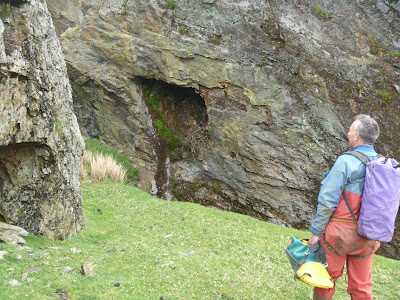 Lionel admires the raven nest (some zooming in required) 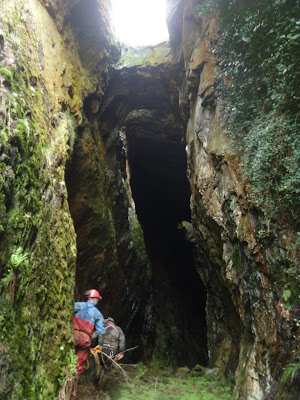 Walking into a stope 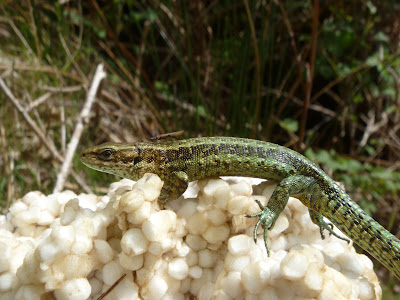 The lizard, once out. Still sluggish though; notice the pesky insect walking right over it.


By the time we had released the lizard we were close to the bottom and a bit mined out. And hungry! I was the only one who had brought lunch. I had eaten some (shared with Rick) but it was time to get to the men's lunch in Lionel's car.

We walked past one low entrance. We saw one that was wet and low and decided to leave it. And then we saw one Rick (initially) couldn't resist. But the water went above critical height, the view wasn't promising and the place stank. We went back! And scampered to the cars. 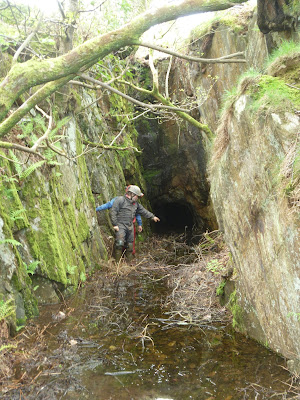 The putrid level we abandoned 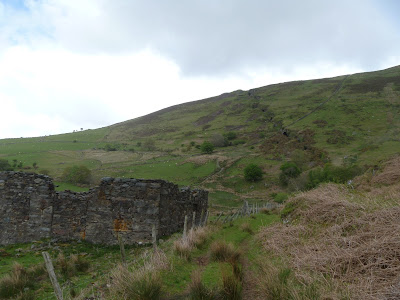 Looking back onto the scar of the mine on the hill

We ate some sandwiches and then it was time to separate; Lionel and Rick would go to Caernarfon as there was a food festival on, and I didn't want to join as I had to be home in time to cook dinner for a friend (see later blog post). So we said goodbye! But I hope they will be back! And they hope so too!
Posted by Margot at 08:56