Slow progress on the bike

Soon after I bought the bike, I ordered a bicycle bell, and mud guards, and a pannier rack, and cycling shoes, and cleats (the thingies with which you attach your shoes to the pedals). It all came! The bell was quickly put in place. The shoes and cleats initially had me a bit puzzled on how exactly to go about things, but that was the next thing that was sorted.

The mud guards were some work; the construction was supposed to just fit, but it didn't; rods had to go through holes but didn't fit; nuts were supposed to keep said rods in place but didn't catch. Hm! I had to file out some of the holes to let the rods through, and I ordered some washers to put under the nuts so they would catch. Not quite how it should be. But the washers came soon. And they did the job! So then I could put the mudguards into position. 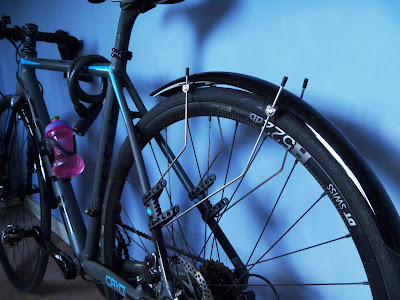 Notice as well the water bottle I found on the roadside

By then I had already tried the shoes and cleats. I had put the pedals on the loosest setting. And put the cleats in the shoes in a sort of standard position: in the middle, pointing straight ahead. And I tried it out on an actual commute. I made sure not to clip in too soon. Would I manage to unclip again? Best not to try on the main road. But I only follow that a few tens of meters. Once I was off I tried clipping and unclipping. Went well!

A bit further on I noticed my feet pointed in a bit. If I'm not clipped in I have my feet pointing straight ahead. I would have to adjust that! And I felt like the cleats should be further forward. And maybe my saddle had to go a few millimeters up.

I didn't really find the clips made such a difference. But then again, I wasn't used to pulling the pedals up yet. So much so that during my first two clipped-in commutes, I found myself (at a point where I have to join a major road during rush hour) unclipping my left foot, putting it down, unclipping my right foot, hooking my shoe underneath the pedal, moving it to its top position, and putting my foot back on it, so I could set off quickly when there would be a gap in the traffic. That is such a pointless thing to do! One day I'll learn. Anyway, the next day I had adjusted the cleats and it was better.

I got to work without problems in my clips. And I thought I had it nailed! But on the way back I wanted to stop to put my lights on. I fluently unclipped my left foot, ready to put it down. But then I lost my balance, and started to keep over to the right. Oh dear! No time to unclip the right foot too. I fell ungracefully to the tarmac. And felt stupid. Luckily I hadn't hurt myself or damaged the bike.

And the pannier rack? I wanted to put that on after I had done the mudguards. Seemed the reasonable thing to do. But  when I unpacked it, I noticed the metal tubing was rather thick. Too thick to fit the panniers! So I will have to send it back and try again. But I will get there with that bike!
Posted by Margot at 08:48