We would have a rescue training in a cave! That is a bit unusual here in North Wales. But I don't mind caves!

I shared a ride with Edwyn. David and Ed travelled together. And we got to Ogof Nadolig (near Cilcain) to find a small crowd. Not a big turnout this time! 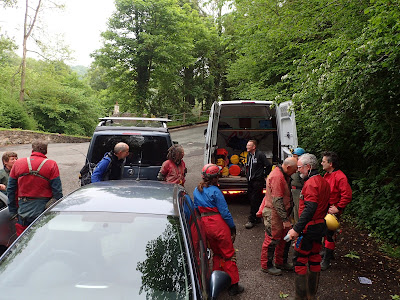 At the parking lot. All pictures by Gethin

The scenario was that someone had fallen down an aven and probably broken a leg. We would have to get him out. There was some confusion regarding whether we needed any SRT kit. He was at the bottom of the pitch; would we have to descend to him? Before it became clear we would get to the bottom of the aven and meet no more pitches we were already down, many of us in SRT kit. As a casualty carer I was in the advance party, together with Heather, the other casualty carer, and Edwyn. Onwards we went! 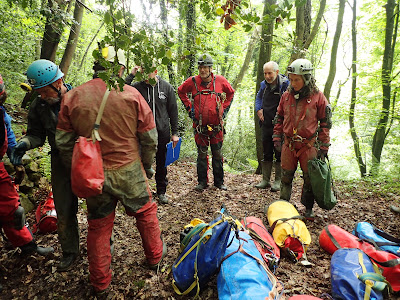 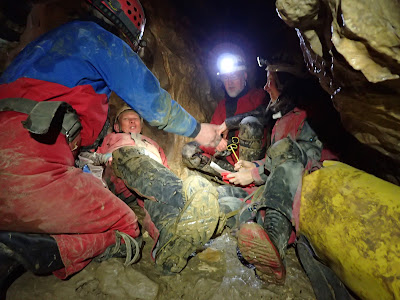 We got to where our imaginary casualty was. We struggled a bit with what to document! Was this casualty conscious and breathing? Hard to tell! We made it up until a team member, Paul, appeared; he would be the casualty. That made things easier! It also made out notes somewhat erratic but well, in a real-life scenario, people don't materialise out of thin air.

We splinted the guy up, and decided to put him in a stretcher. He was unconscious! And we started lugging him out. Luckily we could drag him. That's easier than carrying! But the passage was so low he only just fit underneath the ceiling in some places, all bundled up into the stretcher. 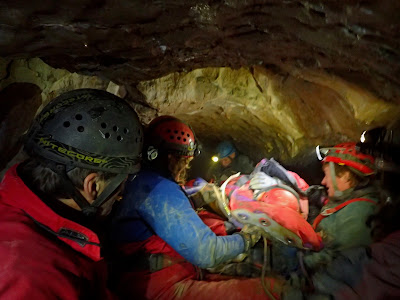 Trying to get him out 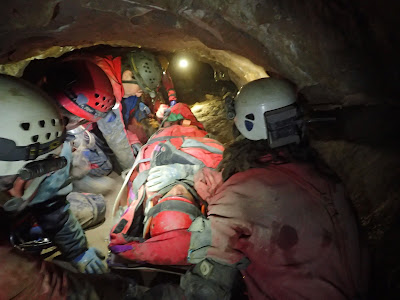 When we got him to the entrance pitch a lunch break was announced, so we got Paul out. I had left my lunch in Edwyn's car, and I wasn't the only one to have left it in the parking lot, so with a group we walked back. Edwyn took the alternative route.

Edwyn's route was a bit long! I had to wait a bit to get to my sandwiches. Oh well. And I had clearly forgot to bring two out of my three flasks. Oh dear. We went back. Now the plan was to have people do things they hadn't done yet, so some went down to this time put Gethin in a stretcher in order to see if we could lift him out. Would he fit around the corner? And I had a go at the new communication device. It worked! I had been promised a more modern system since my debut at cave rescue, and now, finally it was there. But as this was the first time we used it we did use an old field telephone as a backup!

We rigged a Z-rig to hoist Gethin out, and got working. It was a bit of faff! Some of the angles were uncomfortable. And he only just fit. I think he had to twist his legs into funny angles to make it work! If we ever need to get someone out through that entrance we need to remove the entrance construction. Or have the fore brigade do it for us.

Then we were done. We packed up, carried everything back, and changed back into our civilian outfits. We had a debrief, and then we were good to go. David mentioned he wanted to go into a mine afterwards; would anyone care to join? I didn't; I was parched after having had only one flask of tea, and I figured my feet had done enough traipsing around in wellies. And I had stuff to do. Edwyn and I drove back! It had been a good training. I think I got my head around a releasable deviation!