More ceilings to do

I have spent a lot of time on my living room ceiling! But that is only the beginning. I knew I would also want to get rid of the plasterboard in the landing. Phil is lined up to help me with it. But then the electrician popped by. He will need to have access to the electricity cables! And where are these? In the ceiling! And in the extension, which is last century and does not look Victorian whether it has ceiling beams or not, the ceiling is the only way. In the rest of the house, he could get to the cables by lifting some floorboards. But the extension has a flat roof. So then there really is no choice! So after living room and landing, I will also have to at least cut a strip out of the ceilings in the hall, bathroom and master bedroom. And if you have to take out a strip, you may as well take the whole thing down. I have my work cut out!

I'm not so sure about the kitchen and storage area yet. These are old so certainly have nice beamed ceilings, but would I go through that trouble? The storage is storage. Of course beauty has value anywhere, but it does not have priority everywhere. And the kitchen looks rather modern. And any room looks better with beams, but again, they don't have priority everywhere. Maybe some day after I have retired or something! 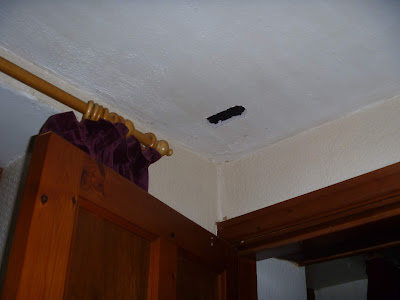 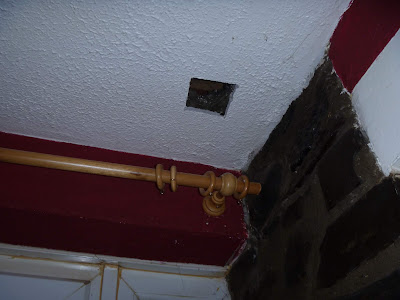 Trial holes in various ceilings
Posted by Margot at 08:33