I'm not a keen baker. But I'll bake for a good cause! I had baked for the cake competition. But now an email had come through, announcing a multilingual coffee morning. It explained one of the organisations on our campus was supposed to support the Welsh language. Trying to get people to speak Welsh during coffee break is a good idea. I suppose they thought it would not attract enough people, though, so they had then included every other language in the world too. And they had asked for people to bring a delicacy from their country of origin.

When my sister had visited, she gave me all the left-over food in the end. A bit much for a one-person-household to finish! It included a lot of butter. And I had left-over sugar from my cake competition times. And flour. And if you have these three things you pretty much have boterkooek ('buttercake'). I figured I could make one for the coffee morning! It sounded a bit awkward, a bit Britons-try-to-speak-languages, a bit we-need-to-be-seen-to-support-Welsh-but-we're-not-keen, but I figured I should support an initiative like that anyway. So I made the boterkoek!

I made a big one and two smallies as I had a bit too much dough. I brought one to the Thursdaynighter trip! And it was greatly appreciated. Even though it was quite evident how calory-heavy it was. A good sign! 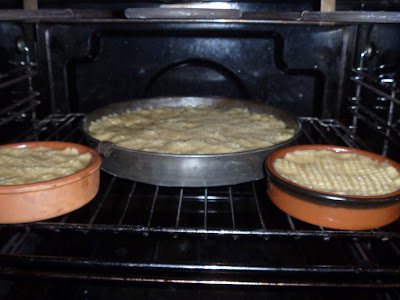 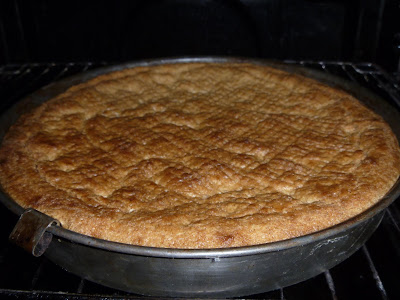 The next morning I brought the big one in. There already were some bara briths and Welsh cakes. I cut my koek up and handed out slices; there were quite many people there! Not really speaking two (or more) languages, but well, that was what I had expected. I tried to get a bit multilingual myself but there's only so much one can do. The boterkoek went down well, anyway! Good. It vanished entirely. I didn't even have any myself! But I had the day before so that was fine. And it indeed isn't very hard; I can do that again if the need arises! And as well: I've now tried my oven! And it clearly works. All good!
Posted by Margot at 09:08