Further onwards with the garden

I had removed some things from the garden. But I had a lot of empty raised beds; I had to put something in them! So When Phil left while the nearby farm shop was still open I went there. And that didn't go as planned; they advertise along the bicycle path I bike several times a week with that they sell plants, but they sell fewer than your average supermarket. They did sell local, organic produce, though! So I bought dinner. And decided to head for Bangor for plants.

I had hoped to buy lots of ground-covering succulents; I like these, and they seem low-maintenance. But the garden centre didn't have many! But I bought about half what they had in stock, and then two red stars, some heather, and something of which I can't remember the name. And I forgot I also had to buy gardening tools! I don't have a full set.

I went back and planted what I had bought (using improvised tools), in the beds dug by my family. Now I have to hope they catch on! I hope they like the soil and the position. One way to find out! 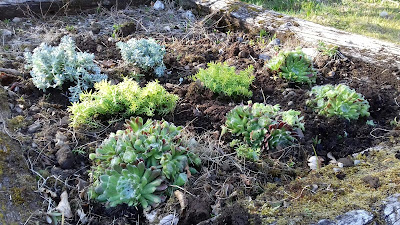 I also had a task higher up; the garden has a gate. That gate leads straight into a raised bed. Why, you ask? No idea. I didn't like that configuration. So I pulled out some of the picket demarcators and dug a trench to put one back, a lot further from the gate. I shovelled the left-over soil in the rest of the raised bed; no problem raising it a bit further. I lugged some slabs of slate from lower down in the garden to put on the exposed soil. Slate makes a nice garden path! I'll have to sow grass seed to make the rest part of the lawn.

By then it was dark. Time to go inside! But what a productive day! 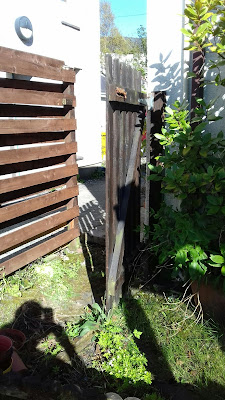 Not easy to see, but the gate touches the sharp edge of the raised bed 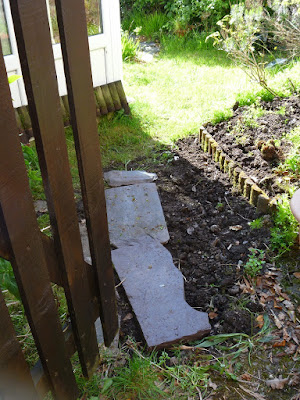 View from the other side; the bed is moved back and slate slabs have been placed. A much better entry into the garden!