The house: a review after the first weeks

It's only last month I moved in! When I write this, at least. Doesn't time fly! It feels I have lived here forever. So what is the verdict so far? How has my life changed?

To summarise: I love it! It's great to live in a beautiful house in a historic village at the foot of a slate quarry and in the foothills of the mountains. No regrets! But what has changed?

My commute is a lot longer now. I am enjoying it! In atypical week, I bike it three times and drive it twice. It's 15km (over the bike route at least) and ~200m down and ~100m up going to work, and, of course, the other way around coming back. It takes a fair amount of time, and I think the 3-2 balance is about right. But it is such a lovely commute! Going to work it starts very quick (the downhill bit), and then I bike back up on a quiet road, and then end up on the big road. It's quickest.

The way back is uphill on the big road, then carefully down the quiet road as it has speed bumps and bad asphalt, and I am now on a bike with narrow tyres. Then I scale another small hill and then I'm on the cycle path for the rest of the time. And it's on the way back I get to see the landscape. On the way out I go so fast I have to be too alert on scampering dogs and such!  But uphill one has more time. I do feel, though, quite often that it's weird to be on that path as it seems I was only there an instant before. But I think that will fade!

The commute also means I sweat more. I wonder if I should have clothes at work, and have a shower when I get in. I worry about about smelling sweaty! And I also end up showering more often in the evening rather than the morning. And I have to wash my clothes more often. And I now only run once a week, in the weekend. I do want to keep running! But during the week I can't really afford to spend more time on exercise.

The house is a lot bigger and I cover all three floors, and I am a bit of a scatterbrain, so I end up scampering up and down stairs a lot. But that's OK!

Having the garden is lovely. I know I'm not a talented gardener, but I think I have things under control. And it's great to be able to just sit in your own garden and recharge! Beautiful landscapes lift my spirit, and now I have one at my disposal. And slowly it is starting to look less neglected. I have for now focussed my attention on three raised beds: one I try to use as a vegetable bed, but it's not impressive yet. The radishes came up, and I think I saw some Brussels sprouts, but there is no sign yet of carrots, leeks or potatoes. Oh dear! Then there is my succulent bed, and that's doing really well, and I have a 'miscellaneous' bed. That is a bit hit and miss! It has three fuchsias and they're doing well. And some plants of which I'm not sure yet if they will thrive. And the other beds are pretty much how Rose left them, bar some family pruning.

I have barely started to enjoy the beautiful area, as I spend all my free time on the house. But even walking back from the local shop and seeing the mountains loom in the background is lovely. And I will get out some day! I hope to live here for a fair while. The hills won't go away!

And the village? It is still a bit run-down, probably has been since 1903, but so far my experiences are only good. People aren't noisy or unfriendly, you can have a skip in front of your house and nobody puts things in, and all such things. Recently a lady asked politely of she could sit on the (perfectly public) patch of grass near the river at the end of the street. I picked up a hitchhiker who smelled strongly of booze but he was very polite. The neighbour is a nice man and as long as I am not either in the neighbour's garden or my own, his dog likes me enough to let me pet him (the dog, that is; not the neighbour). And I have now been to Neuadd Ogwen twice and it was good. And sometimes I hear music waft from it but it has never been annoying. And it's very practical to have shops with wide opening hours nearby. I've only been to the supermarkets; as a practical vegetarian one can guess I don't beat a path to the butcher, and there is a general store but I often end up buying the sort of stuff I could buy there from the similar shop in Menai Brige. I've not been to the cafes yet!

I think I found the right balance between commuting distance, proximity to the hills, convenience with regard to local amenities and glorious solitude. I think I did the right thing! Even though this house eats time and money... 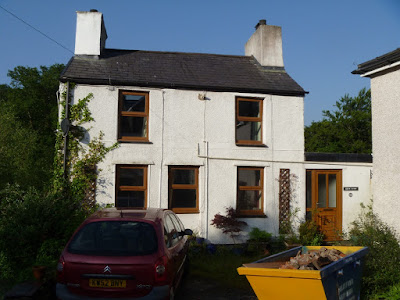