Sunny walk with the Americans

Two months before, I had gone for a walk with Jeff the sabbatical American and his family. In the snow. Now we would go again, but I would be wearing a summer dress! Things can change fast.

They came to my house to pick me up. Julie and Eleanor hadn't seen the house yet, so they first wanted a tour. And then we had to make a plan. I suggested the walk I had done with Helgard. It's beautiful! And they thought it was a good idea.

We found a parking spot. A miracle! On the sunniest day of the year so far, on a Sunday. I had done a solid sunscreen session beforehand! This could go so wrong. We set off from crowded Ogwen Cottage, and there were even still people after we swerved off the path to Cwm Idwal. But that was OK! And Eleanor loved it. She was quite taken by the tadpoles we met along the way. And she liked the well-maintained path! And the waterfalls. 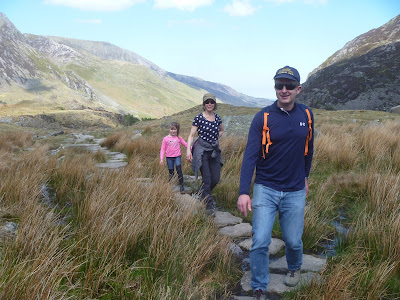 Walking to the lake

When we got to Llyn Bochlwydd we sat down for lunch. And for a bit of dangling hot feet in the water. Very nice! Then we walked on. We did a small break of scrambling, which was initiated by Eleanor, but for which she lost enthusiasm after going up half a meter. Onwards! We went to the style on the ridge, but not further, as then the trip would be a bit too long. Down went rather fast! And when we got down to the car I still wasn't sunburned. Excellent! 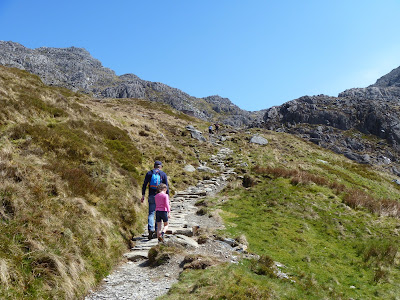 Towards the ridge. Notice the black leggings have gone!

Along the way Eleanor had asked if I wanted to come for dinner. Well, I did! I needed a bit of time in between, but otherwise it sounded lovely. Jeff needed some time too. So at about 4 they dropped me off at home, and about 7 I left again. I had managed to do some things that needed doing! And I had showered the sunscreen off again. And we had a lovely spaghetti meal! A nice end to a nice day. And they offered to come back to my place one day to help with the house and the garden!