I had lived in Wales for four years and never seen the famous Bara Caws theatre company. We had discussed them in Welsh class! And I had lived for a month next to Neuadd Ogwen without going in. It was time to change that! I had seen a poster advertising Brêcshit, their 2018 show. Time to go there! And Dani, from my Welsh class, was keen to join Great!

It started at 7.30 so it made sense to first eat. I know Neuadd Ogwen does food, but I wasn't sure how fast, so I offered to cook. And while I was cooking I heard a knock on the door. Dani!

I gave her a quick tour. She loved my view! And when I suggested we eat outside she thought that was a great idea. So I quickly assembled the food and we carried it outside. Dani almost fainted at my view! I think she'll be back.

We had dinner, carried everything in again, and went to the building next door. We found seats at the back. It was already quite busy! 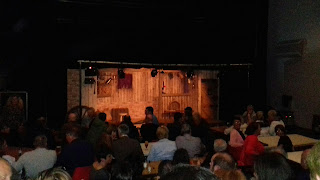 The stage before it started

Then it started. It was quite clear to me I could only follow it to a very limited extent. Dani did better! She laughed when all the native speakers laughed too. But well, it's good practice, and it's not the most verbal of theater genres. Bara Caws will do more fart jokes than word puns.

The plot was as follows: a lady dairy farmer with two sons has sold off most off the herd and has turned the farm into a health centre. Thanks to Brexit troubles, dairy farming didn't bring in enough money. Not that the health centre is doing so well. A developer is using all methods fair and unfair to try to convince her to sell the entire farm. And of course, that almost works but not quite.

All this plays out with a cow that turns out to be a calculating bull, a talking rat, a floaty yoga teacher, a man who thinks he is all kinds of people, including JFK and Jesus, and a woman who is afraid of ringing phones. There's colonic irrigation, with and without consent. Subtle it is not. Fun it is! (Although I thought the colonic irrigation was taking things a bit far.) It's done by only four actors. Only the farmer plays only one role. Especially actor who plays the man who at some point thinks he's JFK is someone else every two minutes.

I have to listen to Radio Cymru a bit more often I think! Which would involve re-tuning some of my radios. I read Welsh books like the best of them but this was above my level. Oh well. It was fun! And Dani thought so too. She's very good at understanding spoken Welsh. And after the show I was home in about three seconds! The crew was already taking down the stage and loading it into a small lorry so in theory I could have walked out of the back door, and stepped out of the building ten meters from my front door. But I hadn't!

I'll keep an eye on what else they have on offer! I hope to see a Welsh film at some point...
Posted by Margot at 09:21