The big day came! Phil would pop over and help me with the ceiling. It looked like such a big job!

Fairly late in the morning he arrived. And basically set to work! He had brought some extra buckets as he saw a trip to the recycling centre coming up. And then he attacked the ceiling! And me too. We started on the plasterboard. The idea is that you hack a hole in it, hook your claw hammer behind the thus created edge, and pull. Then a chunk comes down. And repeat! And that was what it was like for Phil. For me it was a bit harder; firstly, he could do it standing on the ground; and secondly, if he pulled the plasterboard it would indeed come down. I had to stand on a step ladder, and the plasterboard tended to hold my weight. I was making very slow progress! But Phil was a whirlwind. In no time we had the whole shebang down. Time for a cup of tea and a trip to the recycling centre! And we let Millie, Phil's dog, out of the car. That was great; she is lovely, and she checked out the entire house. And the garden. She quickly noticed Dylan, the neighbour's golden retriever, and spontaneously scaled the fence between the gardens. That wasn't what she was supposed to do! But the dogs met and they clearly enjoyed that. Very sweet! 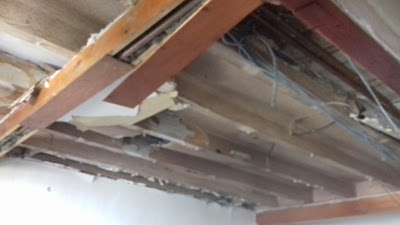 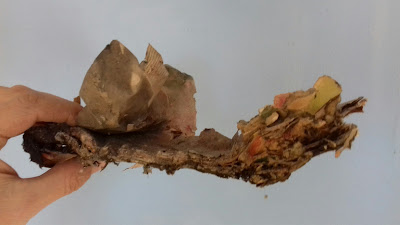 The thickness of the wallpaper stack 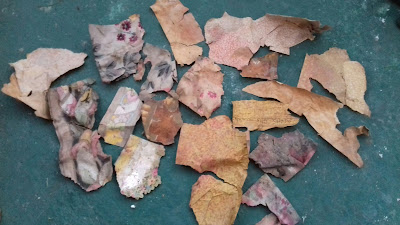 A sample of all the patterns found


The car was completely full with all the material we had brought down. Blimey! But they have a special container for plasterboard. And it had lots of space. We had to wait a few minutes in the queue but it wasn't too bad.

Then the messier work had to start. The wallpaper and plaster that had been hidden by the plasterboard! It was a lot. The wallpaper was a gazillion layers thick; it often came off as a stiff mould of the ceiling. And the plaster underneath was generally some 2 cm thick. Oh dear! So much stuff. And much dustier too. But we again made good progress! And Phil pulled down some woodwork that was in the way. There was a fake beam that hid a pipe, running at right angles of the actual beams. I now have a dangly pipe! a plumber will sort it some day. 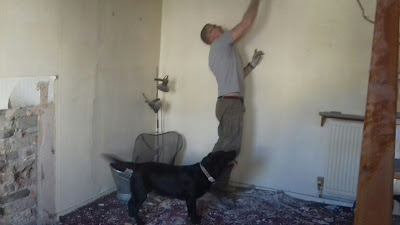 Phil at work, encouraged by Millie 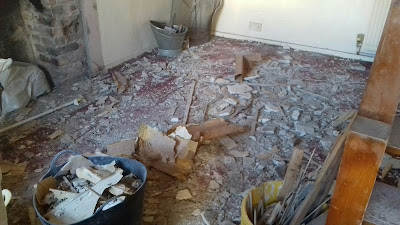 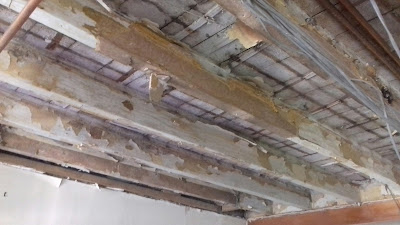 When we had the last plaster down we decided to have another cup of tea, and then Phil (and thus Millie) had to go. But I was so glad they had been! Doing this on my own would have taken me so many days. Phil was literally ten times more effective than I am. And he said he would be back for the other ceiling; that of the landing. I sawed a little hole on that plasterboard too; that looks a lot better! In the living room, the plasterboard itself had been plastered. Here it had only been painted; a lot less material! And above it the beams and floorboards were pristine. No plaster, no wallpaper! Lovely! If we manage to solve the issue of the stairs going down we should do that room in an hour or so! 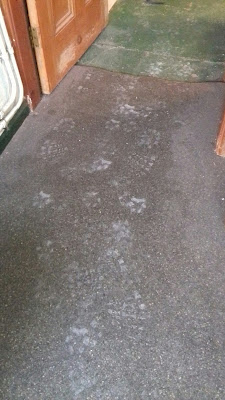 It's rather dusty work; this is what the kitchen floor looked like afterwards. Notice Millie's footprints!