More chaos fought in the garden

I inherited the garden a bit wild! And the bits that weren't wild were often empty. And have spent the last two years trying to tame the wilderness and fill the voids. I am doing it raised bed by raised bed. The first to be tackled was my succulents bed; that is now, in my eyes, lovely, and objectively low-maintenance with the succulents doing their thing and not much weed growing there. A few more were done the year after. And then I got rid of the clump of ferns. But there was still the bit of the garden against one of the walls. It was a mess! But well, so much to do. first things first. But now, after some 2.5 years of living here, and a fair while after the various beds have been planted, quite a lot of growing has taken place! Which is good. And offers opportunities.

The succulent bed has some rather aggressively spreading taxons, and these can nicely be used to cover the ground elsewhere too. And in one of my other beds, I had had a plan of big shrubs in the back, a medium-sized shrub in the middle, and low ground covering plants up front. But the low ground covering plants up front didn't stay very low and were stealing the middle shrub's thunder. And my main bed has some sedum that is getting a bit big. So I had decided what I should do was to clear some of the mess in the specified uncivilised raised bed, plant some sedum in the back where it can be as big as it wants, and then put the not-so-low ground covering plants in front of them, and move bits of some very well-spreading low-staying plants to the vacated places. So one day I set to work! I had Googled if you could do this sort of stuff in autumn, and it turned out that you should do this sort of stuff in autumn. Great!

I had anticipated that the shrubs in the out-of-control bed would put up a fight. I remembered trying to get rid of the rosebushes! That was quite some work. These things had deep strong roots. But I got my spade out and the first shrub was out in seconds. Great! I moved that one back to add some variety to the sedums. Then I went for the other shrubs who just were chucked. And everything easily gave up! That was a relief. I soon had cleared the space!

I got rid of the garden waste, and then set out to replant. The sedums first! That went well. Then the not-so-low plants. I had hoped to plant them in something other than two big clumps, but they were hard to split. It mainly remained two clumps. And then I had to move around low plants! The main bed had several, and the succulent bed yielded some, and even the bed the clumps had come from had a third ground covering plant that had done well. That was easier to split! So I managed to put bits of low plants in all the voids.

One small bed had some plants in that did too well for the space; I moved one into the newly vacated plot and moved another to the centre of that bed. I hope all the moved plants will take root in their new place! And do well. I now have to wait! And maybe do some watering as the forecast is warm and dry. And if this all works out I'll one day (hopefully not in the too far future) move further northwest until I reach the end. I probably ran out of movable plants now so I suppose I may need to go to the garden centre! But that's OK. It's satisfying to create order in the chaos! But I hope it will stay doable; the next shrub along is huge and may not give up without a fight... 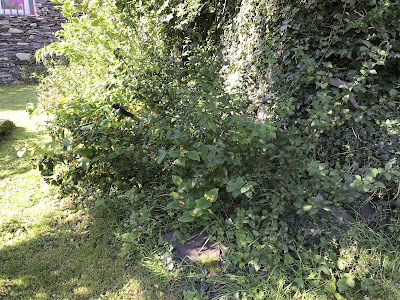 The chaos when I started 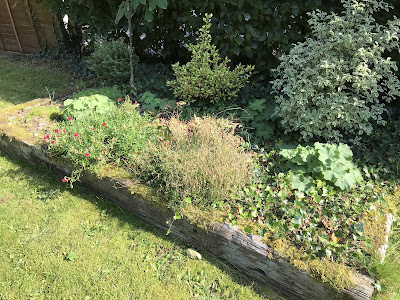 The bed with the not-so-low ground covering plants 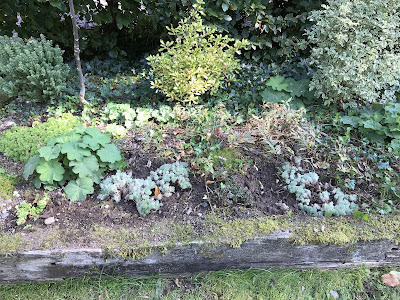 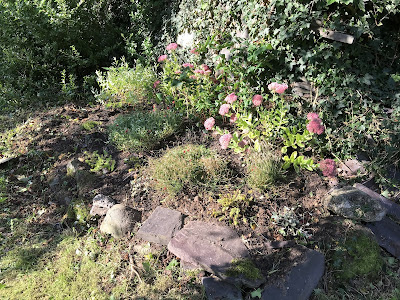 And the chaos tamed!