Reduce water use with buckets

I don't quite feel I live in this century. But in some ways, I think I am perfectly with the times! I am one of those leftie people it's so easy to make fun of. Vegetarian, Guardian-reading, baking their own bread, having plastic-free toothpaste and a waste-free period, alert to misogyny, trying to grow vegetables, and having a compost heap. You name it! You know the type. And I stand by it all: if I'm making small changes to my life that help the planet then people can laugh at me all I want. I read in the newspaper that organic fruit and vegetables have become very popular recently; that is the power we individuals have! If the shops notice that it's the organic stuff we want, they'll stock it, and producers will produce it. And the same with fair trade stuff and plastic-free stuff and the whole lot. So yes it does make a difference! And I do another thing, which I think isn't awfully common (but maybe it is common but people don't talk about it). I try to not waste water! That is quite common I presume. But I do two things that may be unusual.

The first thing is: I have a dehumidifier in the kitchen. It's an old house, it can get a bit damp; if I don't have the dehumidifier my salt won't come out of the salt shaker. And it fills up about once every twelve hours. So what to do with the water? You can just chuck it of course. I don't want to drink it. But I have a bucket I empty it into. And depending on what I do first after the bucket has two dehumidifier loads in, I either give it to the plants, or I flush the loo with it. I think it's silly to flush the loo with drinking water! But I am not going to have the entire house re-plumbed just to create a grey water system. That would cost as much as the entire house I think! I'll just walk around with buckets. The effect is the same. 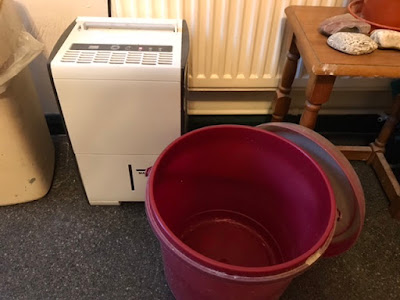 I also have a bucket in the bath. I often don't feel like getting into the shower before the water is warm, especially in winter. But to just let that water drain away: that feels wrong. So that water also goes to either the plants or the loo. To be honest, I nicked the idea from my mother who has been doing something like this for years! I save quite a lot of water that way. I know I live in North Wales and we barely have a shortage of the stuff, but still! Between it falling out of the sky and it ending up in my cistern, I'm sure a lot of energy has been spent on logistics and purifying. And I circumvent lots of that!

Am I fooling myself and ignoring the fact that I have a gas boiler, two wood stoves and a petrol car, and last time I went to the Netherlands I took a plane, while distracting myself with details from the greater picture? Well I'm sure there is some of that. Easier to lug some buckets through the house than to get rid of my car and manage without! And somehow changing my gas boiler for a heat exchange pump is quite something. No point doing that unless the house is well-insulated. And that together, again, would probably cost more than the entire house did in the first place. And it is not a good time to make huge financial decisions! For now I'll just wear an extra jumper and an extra pair of socks so the boiler doesn't have to do much, and I will lug buckets of water through my house with my plant-powered body. It will have to do for now!