Since I had new cupboards in the garage, I had incrementally been tidying up. Smallish things could go into the cupboards, which freed up space for largish things in the shelving unit, which is quite deep. So that meant the largish things weren't standing on the floor anymore! And I decided to use the vertical space more elsewhere too. I put two hooks up, and figured I could loop some bits of rope around the ceiling beams and hang things from them. I have some old climbing gear I used the rope of, and I made some hooks from brass rod. I hung some saws and suchlike! Nicely out of the way. And I put up some clips to hold up the lawnmower. I should also install a hook for the bike! That saves space too.

I had also been making progress in getting rid of some fencing. It had been donated, in the olden days, by a ThursdayNighter who knew I had wood burners. I had crowbarred it apart, and now sawed the individual bits into stove-fitting chunks. I think the planks will largely become kindling! Funny that a ThursdayNighter will actually give me a warm feeling. And when I had my saw out anyway I made quite some progress on sawing some more wood up that I hadn't got around to the previous round, and everything that had accumulated since. That will free up a lot of space! Firewood can be stacked out of the way. If I continue like this my garage will be tidy soon! I might need to pop to the recycling centre one of these days to get rid of some stuff that should go. And then it will be even tidier! 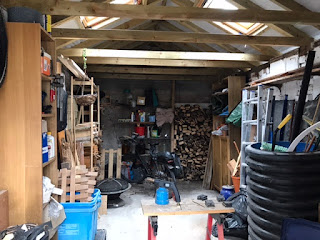 Tidy by my standards! With the torch for hook making standing ready.