The bells and whistles of pre-recorded teaching material

I had started recording teaching material on my laptop. That had to be done in PowerPoint! It had been a bit of an effort, with my laptop straining to keep up with the times, but now I could do the rest on my office computer. That is easier, and creates better results! For one thing; the headset with microphone, combined with a less old computer, results in better sound quality. And now I can use the designated software, Panopto, for it. That makes a difference!

The just switching on of microphone and webcam and narrating over a PowerPoint is pretty much the same. But then the final touches are different! For one thing; Panopto has automatic captioning. If you have students with a hearing impairment they can just read what you say. But the captions are generated automatically, so you need to check them. Sometimes it just mishears you and produces weird sentences. Sometimes you just say things that only make sense in a certain context. For instance, all our modules have codes, like OSX3000. That's not an abbreviation the software recognises so it turns it into 'all as ex three thousand' or something. And if you use specific scientific terms I'm sure it'll struggle! I haven't recorded a lecture in Panopto yet in which I mention particular microorganisms by name, but I'm sure as soon as I start saying things like 'Planorbulina distoma' it will have no idea what I'm talking about. So you have to edit them!

Sometimes it is hilarious if the software mishears you. My favourite so far was when I said ‘resistivity’; what did the software hear? ‘Racist devotee’. I’ve started making a list of bloopers!

I leave the incidences of 'um' and such in; I really say that so let's leave that. We have more pressing matters to sort out!

Sometimes you also need to do some editing. It’s standard to cut start and end off, as that’s where you are switching the recording on and off and that’s not very educational. And sometimes you start recording but it takes longer than you need and you have to stop because something else needs your attention. And then you later need to glue the two parts together. One time, I had said something in a lecture about the practical running of my module, but a meeting with the other staff made me want to change it. So I had to re-record the narration of that slide. And I had to learn how to cut out the old bit and insert the new bit! It's not hard, but the first time always takes a lot longer than subsequent times. It's not a textbook case of smooth transitions but it's done! And the silly thing is that the two parts don’t become one, and if you need to edit the captions you have to do the two original files separately. A faff.

When I had to re-record something, I did notice I am a pedant about it; I had narrated the initial bit after dark, so I wanted to do the re-take after dark too, to make it look similar, And I made sure to be wearing the same clothes! I am a continuity pedant. No student will fail to notice the edit, so I could as well look entirely different, but I have a problem with that. Maybe over time I will become a bit more jaded about such things!

I'm sure the are more things you an do with Panopto! But for now I think I'm rolling. I've got the basics! And I have a lot to record... 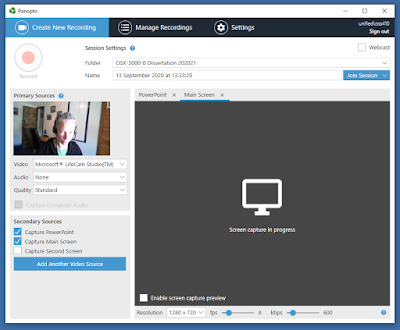