With all my veg growing exploits (and some flower growing, with mixed success) I was running out of space in the conservatory. Some veg has to live there for reasons of temperature, and some of it I'm worried about for reasons of pests, and some of it is too young to live outside. And some of it I just wonder if it will fit outside. The veg patch is only so big! But I had lots of pots and other containers on the floor and I decided that was not ideal. And I had lots of odd bits of wood in the garage! So I decided to make a table. And I did! The old shelf from my bedroom cupboard became the table top and some leftover bits from my wardrobe conversion and some other project became the legs. After I took the pic I added cross bars out of leftover moulding as the whole thing was a bit wobbly (and I know what that can do). And now I have an improvised table for pots! And that means I have the side table back for tea pots and such things. It had been increasingly invaded by vegetation! 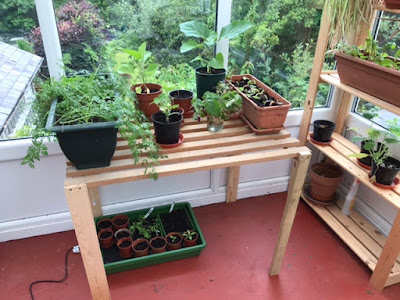