It's summer and stuff grows! And I have a lot of plants to look after. And I thought it would be time for an update. had been trying to make the front of the house look good using both bought plants, and flowers grown from seed. And it has been a mixed bag! Some of the plants are a bit worse for wear. But so far, everything still lives. The flowers from seed were a bit of a mixed bag in themselves: I had first planted lobelias and phloxes, and I had figured the lobelias could go into a flower pot in the shape of a half-buries amphora (yes, I know), and the phlox in maybe one of the rectangular pots, or maybe some of the round ones outside with weeds in. Unfortunately, they didn't do much! They germinated but after that they seemed to have lost motivation. I must have got something wrong like temperature or moisture.
I had also sown mixed perennials; they came up with panache, but they spent months indoors as I was scared the neighbourhood cats would think the planters were cat toilets. But I figured the time had come! There was only one flower to be seen when I placed them outside, but that may get better. I also think I seeded them a bit too densely, but well, so be it. At least it so far seems to have kept the cats out! The main crapper now clearly prefers the grass, since I made the veg bad a bit too crowded. Not ideal but at least it doesn't kill the grass. And I hope my perennials flower a bit more later on in summer!
Later I had sown nasturtiums. These were doing really well! They were big now and could go outside. And I had one spare plant that can make the conservatory look good. Yay for nasturtium! 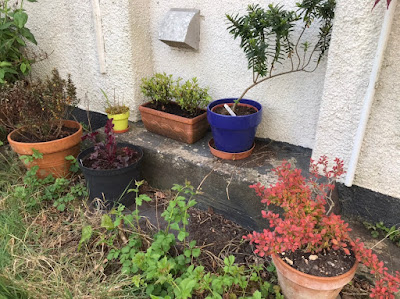 The situation mid May 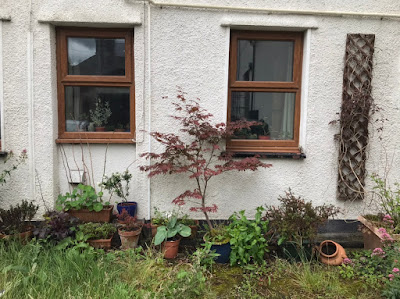 The situation now
Posted by Margot at 08:58