Mend the curtains when the rain is falling

We have had some really hot days! And there still is a lot of the summer to go. There have been days that I sat in my home office in shorts and a bra. My house isn't very prone to overheating; the walls are 50 cm or so thick, and the office is roughly facing north. The master bedroom and the conservatory are in the extension; that's a different story. These can get hot! I have already had the bedroom curtains closed during the day to keep things bearable. But clearly, even early on in summer, even my north-facing office can get too hot. It has pretty good curtains, but I am not in the habit of closing them. I suppose that if things heat up again (as I write this, it most certainly is not hot), I should get into that habit. The sun comes up rather early, and in the morning it shines into the office window. But once I get there I don't want to have the curtains closed! So I figured I might need some netting. And I still had lots of that from the previous house.
One rainy day I put the curtain rail for the netting back up. And I cut the netting to size. Then I needed to put a new hem in. On three sides! I hadn't tidied up the sides when I hung them in the old house. And I didn't have a working sewing machine. Mine stopped working, and the repair shop in Rhos-on-Sea couldn't sort that (I seem to only have blogged about bringing it; not about getting it back still broken). But 'non-essential retail' can be open these days; I suppose I should phone the repair person in Cemaes and see if they accept machines again! It's not a trade with high Covid risk methinks. Anyway; I did the bottom by hand. And I cut the sides neatly. I won't do anything else for a while now! Let's see if I can get that machine fixed first. It looks fine for now. And I hope it keeps a bit of the heat out when that returns! Whenever that will be. And if it hinders the view a bit that doesn't matter too much; it's the other side of the house that has the good view... 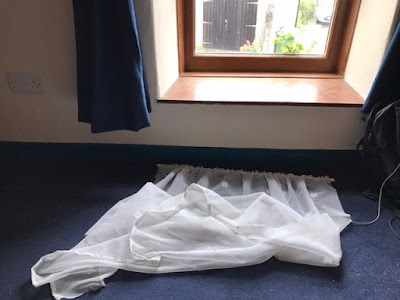 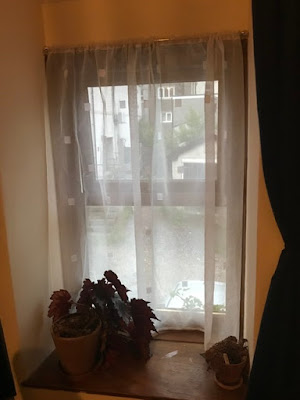 Some evening later: good enough for now!
NB I phoned the Cemaes shop and they say it sounds like an electronic issue. And that is probably hard to repair! Especially in this old machine. I might have to give it up and get a modern one. That is a pity!
Posted by Margot at 08:14