I had been wondering what to do with my berry patch since I bought the house. It was a dense forest with red and black currants, gooseberries, raspberries and loganberries. A bit too dense! And the latter two were a bit imperialist. And they didn't quite pay their way like, say, the gooseberries did. Once they are ripe they go off quickly! So I decided they had to go. And one day I set to work. I managed to dig out a small plant, but the main plant was way too big, way too deeply rooted, and way too sheltered by the black currant shrub. So I mainly just cut off all the stems! And I will have to keep doing that.
I had already cut down some shrubs that got in the way of coming down the stairs or into the shed. But now I really had a big pile of cutoffs! But it was quickly sorted. And I also removed all the weeds and non-descript shrubs that were not berry plants. 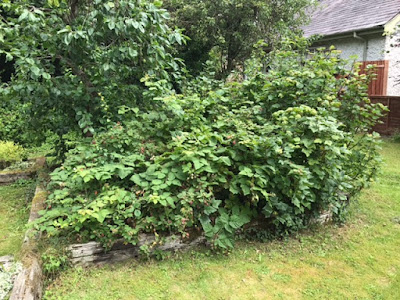 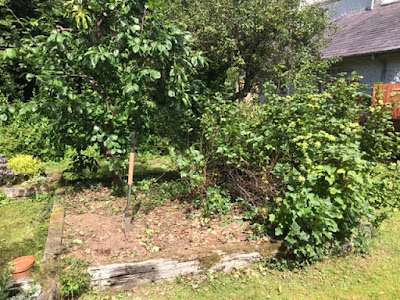 After
When all that was done and the waste removed it looked distinctly different! So empty. But I had plans. I had decided this was an edibles patch anyway; I could as well add to that. I had figured it was time to move my cabbages outside. They seemed to want more space! And I might as well move the carrots too. There was space now! So I did. And I moved a butternut squash plant outside too. I hope they'll be happy there! And not too pleasing to the resident slugs. I'll see! And now I have indoor space where I can plant more. I still have some seed packets I haven't even opened yet. Maybe time for kale and pumpkin? 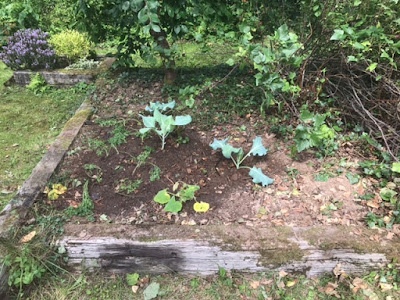 Now with cabbage and carrots and butternut squash! An aside; many of my carrots like to make a bit of a spiral... not sure why!
Am I all sorted now? Not sure! The black and red currents are rather intertwined, and I never eat the red currants. The birds always beat me to it! But that's OK. I am not overly keen on them anyway. And it's nice if the birds have a bit of a feast in my garden! So for now they are safe. Enough work on that patch for now...
Posted by Margot at 08:30