First post-lockdown trip to Netherlands: getting there

The quarantine rules had been lifted on both sides of the border! And my mum wasn’t worried about guests from the UK. So I booked a trip. It would be a bit weird, after spending weeks with 5 miles of my house, and months within some 10 miles of it. But I wanted to see her!

I had decided to fly. That way I would only spend about an hour in a metal tube with strangers! Rather than the countless many associated with travelling by train. And I later realised too that you’re supposed to wear a face mask in a train. And then you can’t eat or drink! I’m sure they are a bit flexible with it; you have to wear a face mask in a plane too, but they do serve drinks. How that combines is anybody’s guess. So I suppose that if you travel really large distances by train, it doesn’t mean you have to manage without sustenance. But ideal it is not.

Anyway. I managed to get everything I really needed to have done before I would leave done the day before, and did home preparations too: all plants had to leave the conservatory. If the weather would get warm, it would get so hot in there the plants wouldn’t cope with not being watered for five days. So they all moved to cooler parts of the house! And I packed.
One Friday morning early I drove off, in my car with its fresh MOT. The KLM didn’t do afternoon flights anymore! I got to the airport without issues. I popped my mask on and went into the terminal. It was quiet there! And all went according to plan. I was a bit wary of the people who wore their face mask over their mouths but not their noses (I think some 5-10% of the people) but what can you do. In the plane I had a row of three seats to myself!

When I got to my mum’s shared front door (she lives in some collective for the over 50s with shared garden and shared coffee room) there was a lady just leaving. She greeted me cheerfully! That reassured me, as I hadn’t been to sure of a whole community of mostly elderly people welcoming someone who had clearly come from the European country with the most deaths, and who must have spent some time in an enclosed space with strangers for a while in order to get there. But it was clearly not seen as an issue. I had made it! First visit in seven months. Time to drink tea with my mum! And then with lots of other people too... 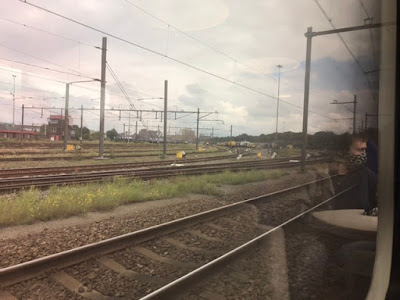