My house, and all that comes with it, is a bit of a strange assemblage. Originally, I think, it was just a typical early Victorian rectangular house. I think it always had several entrances; one main door, at the front; one door a floor lower, right at the street, and one on the side, going into the garden, which ran away from the road and parallel to the river, at the same level as the front door. And then the garden had an outside loo. But things changed. The garage, which was a former public toilet block, was added. And the terrain between the house and the river, which had been a slate yard, and later garages, was bought up and divided between the houses of me and my neighbour. But that meant the house and garden were not very conveniently aligned! And that's the reason why I have a flight of wood stairs and then slate steps down into the garden. And the thing is: these steps get damn slippery when they're wet. And it sometimes is wet in this area. And I don't like falling down stairs. So what to do?
My first attempt was anti-slip tape. It worked a treat! For a while. In the long run, the tape didn't stay put. Then I tried a metal mesh anti-slip step cover. It worked but it collected water, and that meant the metal rusted and I feared the wood would rot. I took it away again. Then one of my more practical friends (one of the Cornish cavers) suggested epoxy with blasting grit in. That sounded good! So when the 'non-essential' shops opened again I went to the local building materials shop and asked if they had that. And they didn't, really; but they did have some other weatherproof adhesive and they had coarse sand. The latter was rather badly sorted so some of it was the right size. I would have to sieve it! And so be it. Yes I can undoubtedly order grit online but this was supporting the local economy, and I can just use the finer fractions for, I don't know, sandbags for in case the river once rises more than I can imagine. The bag was some 23 kg so a bit of a pain to carry home in your arms (backpack too small) but I got there. Step one sorted!
One evening I started sieving. I used my kitchen colander. It didn't really work so well! I first tried dry sieving, basically because I didn't feel like lugging that heavy sand to the riverside. But I had to, as this dry sieving took forever. And wet sieving was a doddle! I had a lot of small gravel in no time. And sand is not pollution. I don't have qualms about adding some sediment to the river! And even though of course that meant I couldn't use the sand for anything else, this was clearly the way. 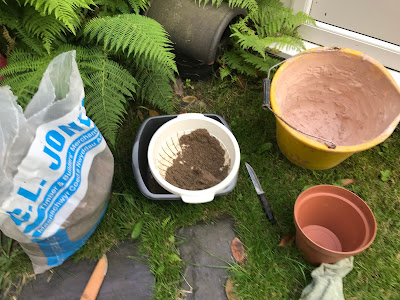 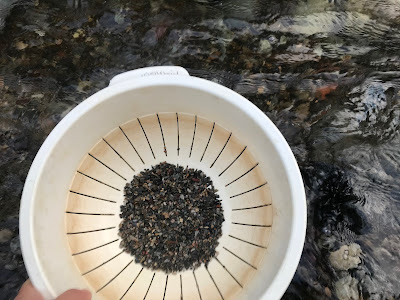 Wet sieving: good idea!
The next thing was drying the gravel. I had the oven in use the day after anyway, so I put the gravel in oven dishes and shoved it in. Sorted! So then I had to try it. I didn't want to try on the actual stairs, so I got a piece of firewood out of the garage and tried it on that. It had to dry overnight. Would this be the solution to my problem? Watch this space! 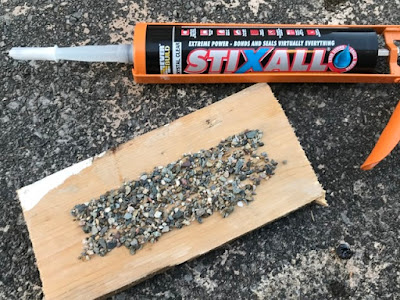