Starting to make the front of the house look good

When I bought the house, it had lots of potted plants in front of the house. Or rather, lots of pots. The plants had got a bit neglected. And in the first, very dry, summer, more died. And weeds reclaimed the space. It looked a right mess. And I had always wanted to do something about that, but it had never got to the top of the to do list. But to do lists look different these days.

I had made a start with a plant bought the previous year. And then one day I popped to the local farm shop which also sells plants. In addition to my fruit and veg I bought a Hebe! And then the Hebe had to go somewhere. And when I was at it anyway I removed some voluminous weeds. And I took some pretty flowers growing in an arbitrary corner of the garden and put them in a pot that only had weed.

When I ordered mushrooms anyway I ordered a plant to go with it. And there was one plant in the garden that seems to be a bit outcompeted by its neighbour. Maybe it wanted to move? Things were starting to take shape.

I also ordered flower seeds. Maybe I could grow some more decorative vegetation from scratch? And one lockdown Saturday I sowed it. I kept the pots in the conservatory; I didn't want the neighbourhood cats to think I had made them two more nice toilets. They already think my veg bed in the back garden is one! That's bad enough as far as I am concerned. So let's hope the flowers come up and I can move them to the front of the house. And there is still quite a lot of pots awaiting their turn in this process that is expected to be rather gradual.

Work is clearly still ongoing, but I think it's already looking a lot better! I can't say I have a natural eye for garden design, or talent for keeping plants alive, but I'm doing my best.. 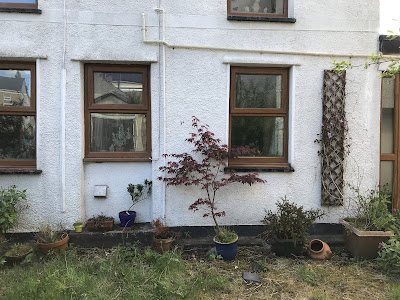