I haven't run a race in a while! Which is a pity; I like racing. But it basically just means you run a certain distance and check how long it took you. I can do that by myself! So after a while I decided I should design a 10k route, and regularly run it, and see if I'm getting faster. And I have an app that allows me to do that: footpath. And it turned out that, very conveniently, the bicycle path I do my standard runs on, and which then turns into a very quiet road, had a farm at exactly 5 km from my house. So there and back is my route! So I try to run that at least once every fortnight now. And I'm not very fast. I really feel the difference between race conditions and this. I suppose to a certain extent because with a race, I tend to make sure I have eaten the right amount of food the right amount of time before the start. And now I just go when it sort of fits between lunch and dinner. Mainly it's just the adrenaline, caused by the sense of occasion and competition,  and the other runners and the audience and such. I don't get that here. So I am deadly slow! But so be it. That means I can shave lots off the time. I have now run it in 75, 67 and 69 minutes. Normally I stay well within the hour! My 10 race times on a 10k so far were:

In this list, 71 and 73 were the Scott Snowdonia races, and 48 and 46 the Bangor 10k. The difference is partly that the Scott race has a LOT of vertical, and also bits where you just really have to watch your feet as the path is uneven and can be slippery. The Bangor 10 doesn't go up and down much, and is all on well-paved roads and paths.


This shows I am about as slow during the Scott Snowdonia race. And that has much more vertical! That's the adrenaline there... And the sub-hour times were mostly road races. And my route is almost all on a well-paved path, but I have to go through seven gates (twice) and I have one bit which is a cut-off on a very steep slope. That's not runnable either up or down.

And the last difference is: if during my home-made 10ks, if I bump into people I know I have a chat! That 75 minutes time I did while bumping into both the neighbour and his dog, and a colleague I hadn't seen since leaving the office. I don't know how many minutes that took but a fair few I think! I did the 67 minute time when I met no acquaintances. Would I manage a sub-hour time before the end of lockdown? Stay tuned! 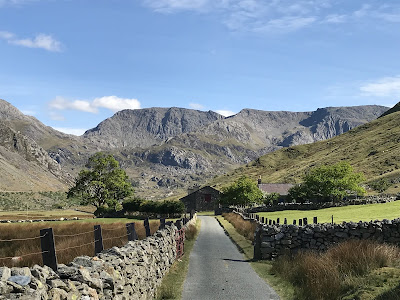 The beautiful farm that is my turning point 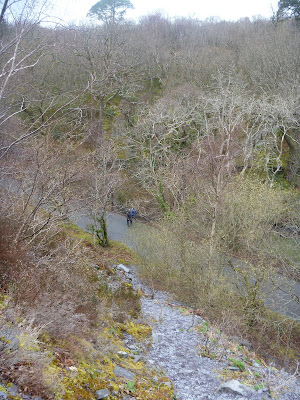 Not sure if this comes across on a pic but this is my steep bit!