Clear the brambles ahead of the knotweed

My battle with the knotweed is ongoing! I intend to repair my injector before the autumn and then do another round of poison injection. I know that assumes uncharacteristic success with mechanical repair, but one has to be optimistic. But the job tends to be unpleasant; the crawling around and injecting stuff isn't much fun on the best of days, but the wrestling through brambles while doing it makes it even less enjoyable. So I decided to go in and get rid of as much of the stuff as I reasonably could while it was still spring and the going was still relatively good. The growth gets a lot thicker later on! So one sunny afternoon I grabbed my gloves and secateurs and set to work. I managed to remove a lot! And when I was at in anyway, I also tackled stinging nettles, and Himalayan balsam as it's also invasive, tries to colonise my garden, and smells unpleasant. A lot done! But it was clear it needed another round.

A week later I went back and removed most of what was left. I certainly did not remove all, and of course it will grow back, but I'm sure I have removed quite a significant amount of time's worth of bramble growth. (And quite some balsam.) So so far so good! Now I need to get that injector going again. I hope I can do that! And if not? Maybe buy another one I suppose, and hope it lasts a bit longer. Having it done professionally must be a heck of a lot more expensive. But it might have to be done! We'll see. At least now we have a river bank that's fairly comfortable to negotiate. And that may come in handy if we get another heatwave this summer, and I'll be wanting to cool off in the river! 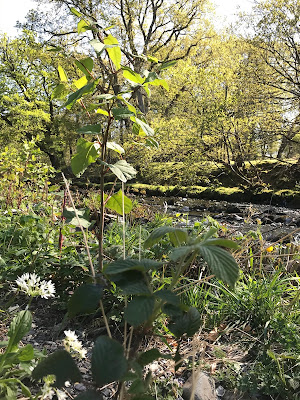 I
Bramble in front of a knotweed stalk 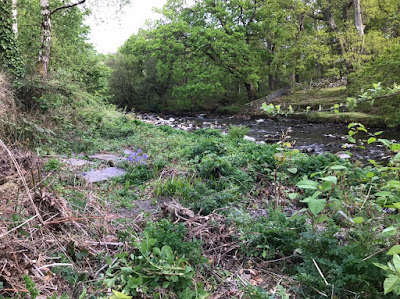 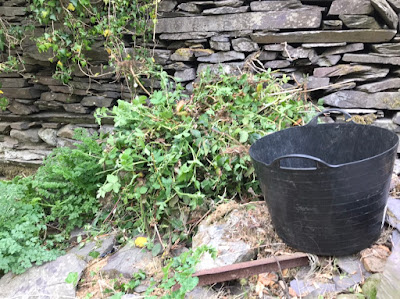 The pile of bramble cuttings
Posted by Margot at 08:07