Save the neighbour by buying drinks

When lockdown happened, Neuadd Ogwen closed. It had to! And we're already two months in. No sign yet of when it can re-open. But it's a multipurpose building; it does film and theatre and yoga and gigs and market and whatnot, but it also has a bar. And the stock was sitting there, gathering dust. And I suppose they now decided it could be any time before they could re-open, and there was little point in waiting until their stock would reach its 'best before' date. And it's foodstuffs, so you can sell them! So they did a usual friday-from-four-to-six thing. Not on the parking lot this time, but from their own premises. I ordered six regional beers. At then end of the day they advertised what was still available, and then I ordered some alcohol-free beers too. These hadn't shifted so well! But they're quite up my street. I'm now such a lightweight I rarely manage an entire pint (of alcohol-containing beer) in a day. And it's the alcohol; not the volume of fluid. With hot water I can drink almost anyone under the table! So now I'll have a good stock of beer I can just glugg away, and Neuadd Ogwen has money, rather than perishables. And then everybody wins! 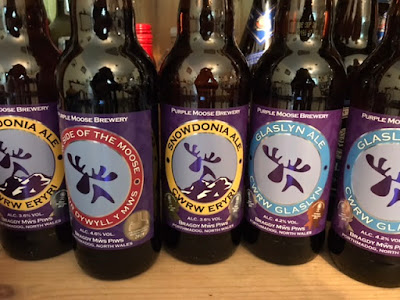 Most of my regional beers