Classic book again; a Welsh one this time

For some people, lockdown is an excellent time to finally get through their 'to read' list. Not for me though! I read even less the normal. The culprit is my new working schedule; I used to do my work at home, and only rarely fire up my laptop in the evening. So after dinner I often had a bit of time to read! But now I tend to start a bit early, work until 4 or 5 PM, then go for a run and a shower, and then often straight into the kitchen. And then after dinner some more work waits. By the time I stop that not much of the evening is left! I suppose I am lacking in discipline when it comes to keeping work and leisure balanced and separated. I might have to work on that. But either way; it took a long time but I finally finished another book. And it is a classic! I had already read 'Un nos ola leuad'; often seen as the best Welsh language book ever. And it's about Bethesda too. But if you dig a bit deeper into Welsh literature you quickly find another book: Traed Mewn Cyffion ('feet in shackles') by Kate Roberts. She was seen as 'the queen of literature' and this is often quoted as her best book. My Welsh tutor Jenny said it was boring so I thought I'd give it a go. I like books in which not much happens! And it didn't disappoint, even though you could argue a lot happens.

The book starts in 1880 with a young woman who has moved to somewhere not too far from here (the author grew up in Rhosgadfan, so that may be where this is set) from the Llyn peninsula. She's just married a local quarryman. And then you follow her over the decades. They have six children, and the quarry work is fraught with issues. It's dangerous, badly paid, subject to the whims of the foremen and in the course of the book, activity is dwindling. It's not easy to keep the family running. Most of the book is from the perspective of the woman it all starts with, but from when the kids are a bit older, they sometimes take over as narrator.

You don't get a very clear idea of the marriage of the main character. The husband seems a bit taken for granted. The children get more attention, and they are a mixed bag! There is the eldest daughter who goes to sewing school and from there into domestic service. She is not one to get much attention.

There is the oldest son who, after school, starts work in the quarry too. That's him out of the way; he leaves early and comes home late, and is then so knackered his siblings barely get to interact with him. He later moves south to work in the coal fields there.

The second daughter gets a lot more attention. She is a bit rebellious. She hangs out with posh boys from town. This doesn't make her popular with her parents! And that leads to her then spending a lot of time with her grandmother instead. And when that grandmother then dies, it's not her son who inherits the modest amount of money, but her. And she promptly marries one of the posh boys and is off. Her relatives can drop dead!

Karma is at work in tortuous ways, though; she has a child, and when it still is small, the posh boy does a runner. And there she is, with no income. She sells off her last possessions and starts sewing for a living. The kid moves in with the family his mother has abandoned.

There's also the second oldest son. You see quite some of the book through his eyes. He does well in school and gets a scholarship for further education. He becomes a school teacher. It pays the bills but not much more than that.

The youngest son does well in school too. He also gets a scholarship! It's not clear if the family can afford to do anything other than send him off to work so he can supply the family income. But school it is. Until the war breaks out and he volunteers for the army. Of course he gets shot. More misery for the family.

The book ends with the second youngest son being all pensive and gloomy. And the cat being oblivious to it all. A generation of struggle in the North Wales countryside. And is anything looking up?

Don't read classic Welsh literature if you're looking for a hoot! I don't think these slate hills have grown that sort of literature. But it was interesting to read. The language wasn't easy; it was written in the thirties. But aside from the language, it felt very current. Not quite literally; things have changed. Girls rarely go to sewing school (do they still exist?). Few people work in slate quarries. Maybe what I mean is that even though the setting was mainly the Victorian age, and the language is dated, the characters could have been written yesterday. I enjoyed it! I think I will re-read this. But maybe now something more recent to not make the Welsh harder than necessary! 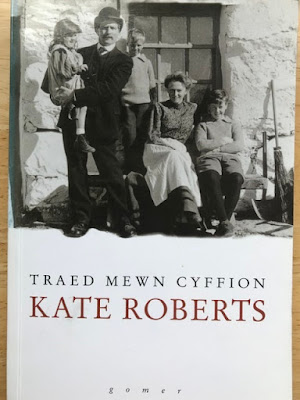