About a month ago I went on a fairly long bike ride. And then that was outlawed! And it seems now that only weeks later that was reversed again. I tend to keep an eye on the lockdown rules but I had missed that one. Maybe because I get a lot of information from radio 4 and the newspaper, and these are a bit England-centric. But I'm glad I found out late rather than not at all. And I had only gone out on one bike ride in the meantime; one run resulted in a bit of a complaining left calf, and I decided to give it a bit of a rest. So the next day, I did a short bike ride, through Mynydd Llandegai and Rachub. It was a busy day so I wouldn't have biked far anyway, even if I would have known it would have been allowed! And I think it did the calf good. I was OK running again two days after the funny feeling occurred. 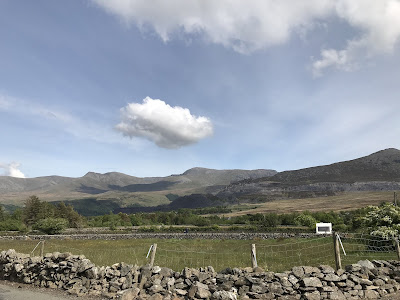 View on the Carneddau from Mynydd Llandegai 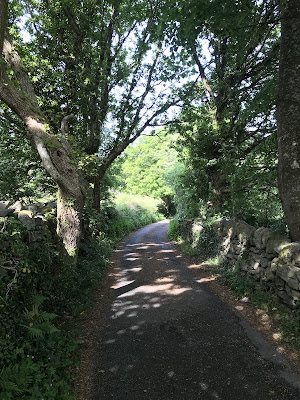 During the week I'm not likely to bike very far, but when the weekend came and it was allowed again to bike a fair distance, it was time to enjoy that! Even though I could run again, it was time to venture a bit further from home. So I decided to bike to Capel Curig. I had driven that so many times but never biked it. I don't think I'd be keen in normal times; it's a locally important traffic artery and people often drive quite fast on it. But nowadays the roads are empty!

I set off on my old bike. Flasks and sandwiches in the bag. And a puncture kit. And I first took the old road to Ogwen Cottage. And from there on there is no choice: you need the A5. But it's delightful! Barely any traffic. And from Llyn Ogwen it's basically all downhill. What did strike me, though, was the police activity. There were two or three cars parked up at the foot of Tryfan. And a police car was there too! I think telling people to sod off. Why would you park there other than go climb Tryfan, which is not allowed?

When I stopped to take a layer off I saw the police had created a roadblock right behind me. They were clearly checking! But it's a bank holiday, and the English are already free to travel. So I can imagine why! And I saw another police car and a police motorbike on the road as well. I didn't know we had so many of them. And when I got to Capel Curig and got off the road to park my bike, I found out I had a police car right behind me who seemed to have been intent on stopping me. He didn't need to now! He got out of the car and asked me where I had come from and was going to. They really are keeping an eye on where people are going! But my Bethesda-Capel Curig-Bethesda plan was met with approval.

With that sorted I parked my bike, walked into a field, and had my lunch. That was nice! And then I biked back. It's not steep so it was a leisurely ride. And just for the heck of it I went the entire way along the A5. That way I could judge how steep it was! I might sometimes want to bike the A5 to get to the start of a walk, when that sort of stuff is allowed again, and then it's nice to know how steep that route is. And it's ok! So I could see myself walk Ogwen Valley before too long! That will be nice... From just outside Capel Curig 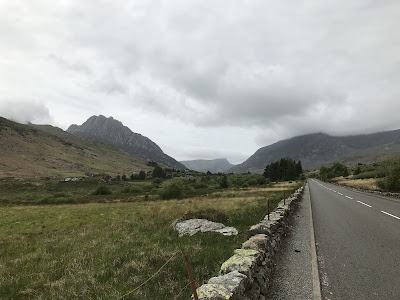 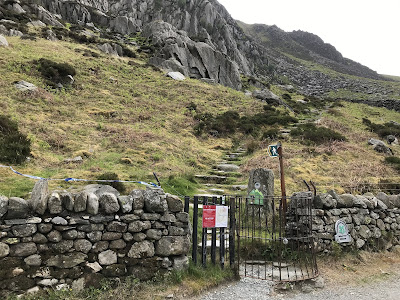 The path to Tryfan. On the way back, I saw no cars there! The police action had helped.
Posted by Margot at 06:55