When lockdown started, I thought that would be it for my blog, at least for a while! What to write about? But that's not what happened. Life profoundly changed and there was much to reflect on! I often had so much ready that I sometimes didn't quite know what to do with it all. I think it happened a few times it lagged by a bit more than a week. Normally I avoid that! And I think I only once posted twice on one day. But I think now, after eight weeks, it's finally catching up with me. Yesterday I had nothing ready and I skipped a day, which is in itself fine, but a lockdown first! I suppose the restrictions are so tight that one runs out of things to say even if one doesn't need much encouragement. And now I'm turning not having something to say into something to say. But soon we'll get out of the marking period and then I suppose I will have a lot to say about our attempts at becoming distance learning experts... 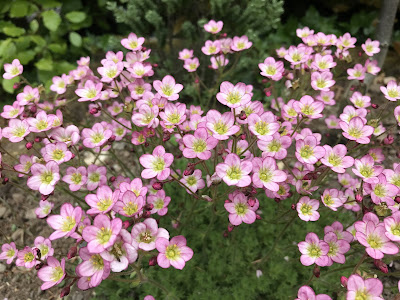 Arbitrary pic of pretty flowers in my garden